The 24-year old Manipuri, who had won gold in the Commonwealth Weightlifting Championships at the same venue last year, broke the existing CWG record with a lift of 84kg in the snatch category. She then lifted 108 in the clean & jerk to finish with a combined effort of 192kg. 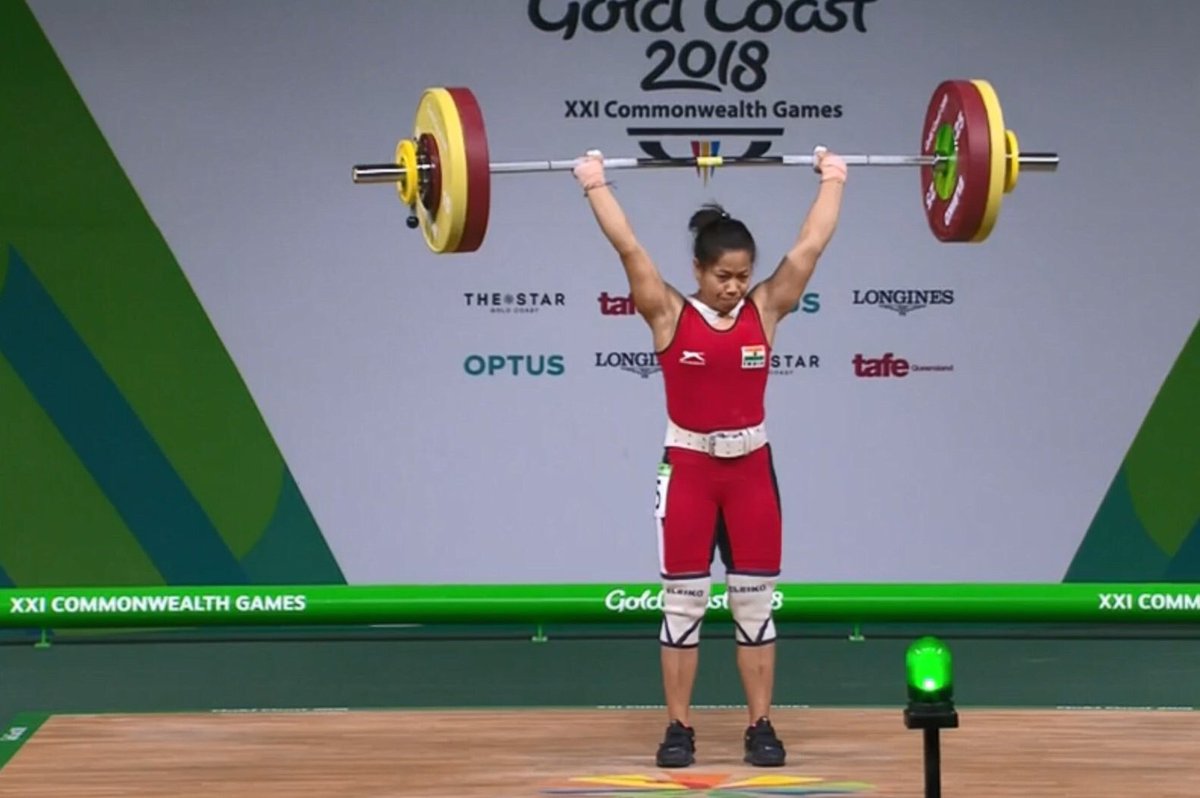 Defending champion, Loa Dika Toua of Papua New Guinea, claimed silver with a total lift of 182 (80 in snatch and 102 in clean & jerk). Canada’s Rachel Leblanc-Bazinet claimed bronze after finishing with a combined effort of 181kg.

With this gold, Sanjita has justified all the hype surrounding her before the games began. She was one of India’s brightest medal hopes and totally lived upto her billing. Four years ago, she had won gold at the Glasgow CWG in the 48kg category.

Coming to the event, she began the snatch with a lift of 81kg before equalling the CWG record with 83kg in her second attempt. In her third attempt, she broke the record with a super lift of 84kg.

In the clean & jerk, she moved into gold medal position with lifts of 104kg and 108kg before losing her balance in the final attempt. It left Dika Toua with a tough task of lifting 113 kg in her final lift to bag gold but she failed and Sanjita bagged the gold. Sanjita’s gold came a day after Mirabai Chanu won gold in the women’s 48 kg.

Meanwhile, Twitter was quick to hail Sanjita for her record-breaking gold medal-winning performance.

Here are some of the reactions:

Bhartiya Naari Sab par Bhaari. One more Gold. Congratulations #SanjitaChanu for winning our second gold in #GC2018Weightlifting in the women's 53kg category. #CWG2018
Her second CWG gold after the 48kg one in Glasgow. Proud of you champion. pic.twitter.com/Xnms7T6Byz

Twice is always a charm!

What a great start to this morning. Congratulations Khumukcham Sanjita Chanu on keeping up your excellent track record of being a🥇winner at #CWG! After a Gold in Glasgow in 2014, a Gold in weightlifting at #CWG2018 as well! Very proud! #SanjitaChanu pic.twitter.com/KpLGR2GSfN

India's second gold medal of #CWG18 has come from one of the favourites, Sanjita Chanu, who finishes with a combined effort of 192. Superb. #weightlifting

Congratulations India! Another moment of pride as Sanjita Chanu bags Gold. India’s 3rd medal at the #CommonwealthGames2018 #cwg2018 – this too from Weightlifting. She hails from Manipur and also won a gold in 2014 Glasgow games – kudos pic.twitter.com/zMnVPolfFA

Nation is proud of you #SanjitaChanu

Great start to the morning for India.

Congratulations #SanjitaChanu for winning the second gold medal for India at the #CWG2018 #GC2018 !We are proud of you!

Good news to start the day. Another Gold! #SanjitaChanu