The current WWE 24/7 Champion Rob Gronkowski could be seen returning to the NFL, pretty soon leaving his WWE career in jeopardy.

It started all of a sudden prior to WrestleMania 36 indicating that he might be transforming to a pro-wrestler. But perhaps, that’s not happening especially at a time when everything is uncertain due to the coronavirus pandemic.

ESPN’s NFL insider Adam Schefter reported that there’re talks going on between the New England Patriots and the Tampa Bay Buccaneers for Rob Gronkowski to be traded to the Bucs.

The retired tight-end could end up playing for the Bucs, along with former Patriots quarterback Tom Brady, who also signed a deal with Tampa. Gronk signing a deal with Tampa would become a massive trade-off.

The source also noted that the two teams are currently having talks about Rob Gronkowski’s potential returning to play ahead of this week’s NFL Draft. No confirmation was given whether an NFL return would mean for Gronk’s WWE future. As of now, Gronk is reportedly left with 1 year and $10 million on his contract with the Patriots, the team he made his career famous. 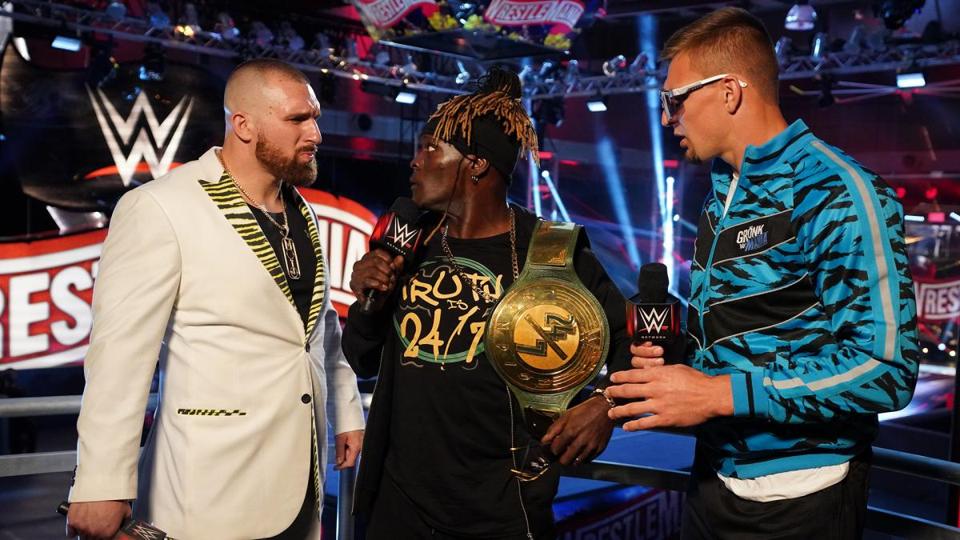 Rob Gronkowski signed a WWE deal before WrestleMania 36. Reports stated that the contract for him is to wrestle inside the squared circle. WWE then used him as the host of WrestleMania 36 Night One and Night Two. He was also seen winning the 24/7 Championship from his good friend Mojo Rawley during Night Two.

Patriots and Buccaneers have been discussing a trade for retired TE Rob Gronkowski, per league sources. Gronkowski has one year and $10 million left on his contract. But the two sides are, and have been talking, prior to Thursday’s draft.

The initial belief was that WWE has had plans for Rob Gronkowski to use him as a part-timer who would be a special attraction for the WWE audience. He could wrestle his first big match at SummerSlam this August which is scheduled in Boston, Massachusettes. Since Boston is the second home for Gronk due to his stint with the Patriots, it would have been a perfect debut for him.

However, nothing is certain at this point amid the Coronavirus outbreak. SummerSlam could have been canceled as WWE has the rarest chance to host shows with the audience for the rest of 2020.