Roman Reigns is sitting at the top of the food chain in the WWE and now he is officially set to compete at WWE Survivor Series 2021. In the potential main event of the upcoming event, the reigning champ from WWE’s blue brand will be engaged in a battle against the raw brand’s champion.

A huge RAW vs. SmackDown singles match has been announced for the upcoming WWE Survivor Series pay-per-view during this week’s episode of Raw from the KFC Yum! Center in Louisville, Kentucky. In this match, WWE Champion Big E will represent the red brand as he goes up against WWE Universal Champion Roman Reigns of the blue brand. 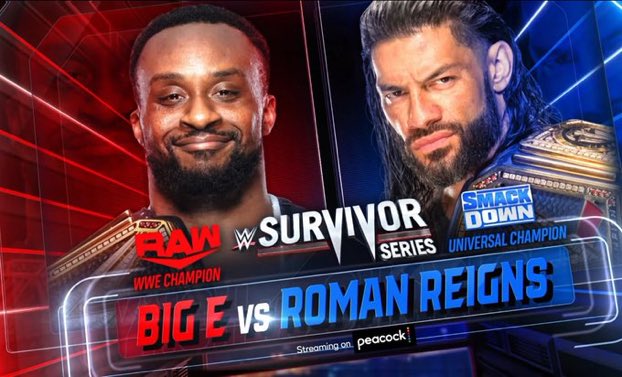 For the first time ever in their career, these two men will be competing in a singles matchup in WWE. The WWE Universe has been gearing up for the contest since their first face-off, back in September after Big E’s championship win via an MITB cash-in on then WWE Champion Bobby Lashley.

In the meantime, Roman Reigns has been building a feud over the New Day members. A Battle for the Rule of SmackDown is currently slated for this coming Friday night. In that non-title bout King Xavier Woods will lock horns with WWE Universal Champion. The winner will be able to say they run the blue brand.

During last week’s Smackdown, Woods defeated SmackDown Tag Team Champion Jimmy Uso in the main event. Per the stipulation, Uso had to bend his knee to Woods, but Roman Reigns interrupted that post-match angle and joined The Usos in beating down King Woods and Sir Kofi Kingston.

WWE Survivor Series 2021 pay-per-view will take place on November 21 from the Barclays Center in Brooklyn, New York City. Currently, the match card of the night goes as follows,