The eagle-eyed wrestling fans always keep their eye open on finding disputes from WWE taping and when it comes to a wardrobe malfunction, it has to be let known which makes the concerned superstar trending. Sonya Deville is the latest inclusion to the list of WWE Women’s Superstars who had experienced the same. It seems the modern editing techniques of WWE weren’t enough to hide that.

Sonya Deville have had experienced an accidental moment during SmackDown last week. Although it was a pre-taped show that was aired after being edited by the WWE, this wardrobe malfunction managed to make the cut and some of the WWE Universe shared their pleasure on getting the view. The point is that the moment was noted after a few days later the show aired, last week.

As per the match listings, Sonya Deville was seen wrestling Lacey Evans on Friday Night SmackDown, last week. She was wearing a revealing black outfit that was pretty unusual from her gears. In the process, she revealed a bit too much of herself. Sonya Deville quickly adjusted her top to stop the view, but the cameras were able to capture the screenshots and posted those online.

The real image can’t be posted here, but it’s available on the internet. We have given the censored images in the story.

This appeared to be two consecutive weeks that SmackDown featured such wardrobe malfunction stories. The previous week, the other member of the Fire & Desire tag team suffered such accidental exposure. As reported earlier, Sonya Deville’s former best fried Mandy Rose also had a dispute with her dress on SmackDown as she was trying a new denim look matching up to boyfriend Otis. Interestingly, that made to the final cuts of TV tapings, too. 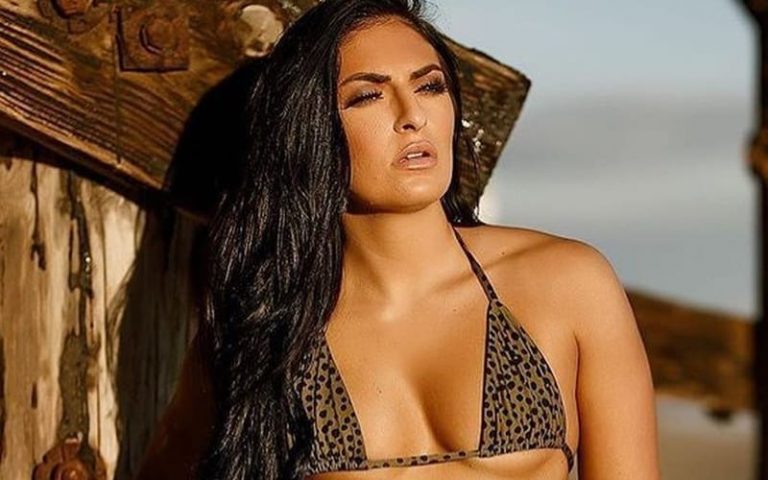 Sonya Deville is recently trying to garner attention with her efforts and WWE officials are impressed with him. The New York Post recently spoke to her where she wanted to become a “Daddy Deville” persona. The idea was originated on The Bump where she joked about becoming “Daddy Deville” from Becky Lynch’s The Man gimmick.

“It came from a year ago when I was responding to a compliment that Becky Lynch gave me on ‘The Bump.’ She said I was the next rising star. I felt like she was calling herself The Man, but I felt like I could be superior to her in a type of way. And what’s bigger than The Man is being The Man’s Daddy. I was just trying to level up at that time and it kind of just transpired into having a life of its own.”