The #SpeakingOut movement continues to heat up revealing some unexpected truths of some renowned superstars. Now the biggest box office attraction of the WWE has also been added to the list of superstars who was accused of sexual harassment towards their colleagues. It’s none other than Brock Lesnar who was now accused of some forceful actions.

During a recent appearance on Kee On Sports podcast, former WWF Diva Terri Runnels talked on this #Speakingout movement. She then accused the former WWE Champion Brock Lesnar of sexual harassment. She disclosed a story from the WWE locker room from back in the days where The Beast Incarnate apparently showed his private parts to her. 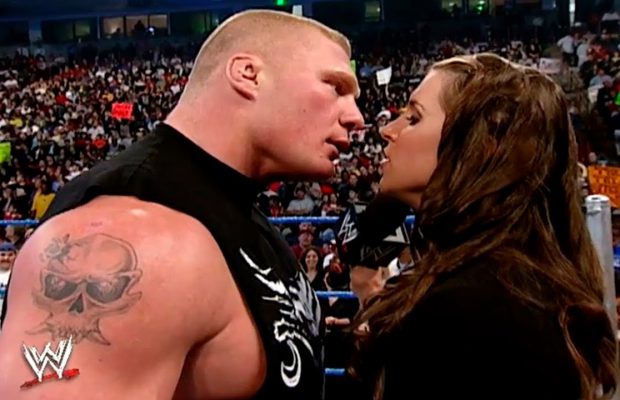 Below is what Terri stated,

“I don’t have a lot of respect for Brock. I don’t think he respects wrestling fans. Brock did something that was in today’s day and time…he showed his penis to me and called my name as I was walking past where he was in the dressing room. He opened his towel so I could see his manly bits.

At the point, he knew he was going to have a lot of power, that they were going to give him the strap but at that point, I had been in the business for a long time. I deserved respect and what he did was very, very wrong from a professional stand-point, from a sexual harassment stand-point, however, you want to look at it, it was wrong.”

Terri Runnels made some adultery fame around the pro-wrestling universe for his storyline with Goldust. These two were seen doing some make-out scene who also posed in an uncovered state.

But that surely didn’t allow Brock Lesnar to do something like that towards her colleague. It was noted that Terri also made the same claims during an interview back in 2004. But with the #SpeakingOut trend ongoing on Twitter, the story is now getting highlighted.

On a related note, WWE superstar Paige’s family was called out due to this #SpeakingOut movement. Many accusations of sexual abuse were made towards Saraya Knight, Paige’s mother who runs a pro-wrestling promotion around the United Kingdom. More evidence has been surfaced to back up those claims.

Ringsidenews.com has been sent an email from correspondence to a wrestler from the AWS email account. The email dated 12/3/2005 suggested that if a wrestler wants to get booked in the promotion run by the Knight family then they need to sleep with whoever was sending that email.

This was indeed a disturbing email that strengthens the ongoing #SpeakingOut. Paige hasn’t responded to the allegations and so not is her mother, Saraya. But she did leave social media and then closed the pro wrestling business entirely following these accusations.