And again, Delhi Daredevils are back on the track. All thanks to Rishabh Pant and Co in the first innings while Trent Boult is the man for the home side in the second innings. All in all, it is a sweet revenge for Delhi Daredevils over Rajasthan Royals.

It is important for us to win all the matches: Iyer

Speaking of the victory, Shreyas Iyer termed it as the much-needed victory and asked to repeat the same show from his boys. The new skipper added that the team is in positive mood including the head coach, Ricky Ponting and quoted that Feroz Shah Kotla is a tough ground to defend.

”It was a very important victory for us. This wicket is very good and even 200 is very less. Bowlers kept their nerve and we came back strong. I dropped the catch but we won the match, we should look forward. Start that Shaw is giving is amazing and Pant’s role in the middle is pivotal,” Shreyas Iyer said.

‘‘It is important for us to win all the matches. Ponting is a positive guy and no one is thinking negative in the dressing room. It is difficult to bowl with the ground being small, it is really tough to control when the batsmen start hitting,” he added while speaking in the post-match presentation.

However, as Shreyas Iyer said, it was an important victory for the team and they need to take on the confidence in their coming matches. The sublime form of the trio Prithvi Shaw, Shreyas Iyer and Rishabh Pant is bailing them away in the batting department.

Delhi Daredevils would be hoping for a match-winning performance from Colin Munro and Glenn Maxwell in the next coming games which are vital to making a progress in the tourney.

Currently, Delhi Daredevils are placed 6th in the points table with 6 points in their kitty. Coming to the upcoming assignment, they will pack their kits to travel Hyderabad to take on in-form Sunrisers Hyderabad.

Mumbai, February 24, 2018: To reimagine the 11th edition of VIVO IPL and bring fans closer to their favorite cricket tournament, Star Sports has joined hands with Rajasthan Royals to announce their new captain on the Star Sports Network. This is the first time an IPL franchisee will announce their captain on television.

Rajasthan Royals, who etched their name in IPL history by becoming the first ever champions, will now under the mantle of Shane Warne take on the challenge to find the perfect captain for the team. The Royals at this point are extremely well positioned with strong players including Ajinkya Rahane, Steve Smith, and Ben Stokes, this makes the decision a tough one!

The captain plays an important role as there are players coming from different countries and he needs to bring them all together.  A captain is instrumental in creating a culture within the team wherein everyone gels with each other on and off the field. We indeed have some great choices- the likes of Ben Stokes, Ajinkya Rahane, Steve Smith who bring leadership values with them. Jos Buttler too has capabilities to lead a team.”

Fans will be able to watch the entire episode of PHIR HALLA BOL- RETURN OF THE ROYALS featuring Shane Warne along with Mr. Manoj Badale, co-owner – Rajasthan Royals as they unveil their new captain for IPL 2018.

“We really appreciate Star Sports’ efforts to create a six-month buzz around the VIVO IPL 2018. Indians love cricket and such programming innovations are bound to win a million hearts. We are extremely delighted to have partnered with the Star Sports network to announce our captain for the upcoming season.” said, Mr. Manoj Badale, co-owner, Rajasthan Royals.

In the lead-up to the tournament, Star Sports brings 60 hours of dedicated programming per month featuring a daily dose of proprietary shows such as Game Plan, Cricket Countdown, and specially curated Franchise based episodes. The 11th edition of VIVO IPL starts on Saturday, April 07, 2018 with defending champions Mumbai Indians, who will host two-time winners Chennai Super Kings. Rajasthan Royals will kick-off their season with an away fixture against Sunrisers Hyderabad on Monday, April 09, 2018.

The Board of Control for Cricket in India (BCCI), on Friday (July 14), welcomed Chennai Super Kings (CSK) and Rajasthan Royals (RR) back into the Indian Premier League (IPL) after the completion of their two-year suspension imposed by the Supreme Court on corruption charges.

Both the teams were handed a two-year suspension by the Lodha Committee on July 14, 2015. But with the suspension now coming to an end, they will now be able to feature in 11th IPL edition next year.

READ MORE: (If We Are Given An Option of Retaining A Player, It Will Definitely Be MS Dhoni: CSK) 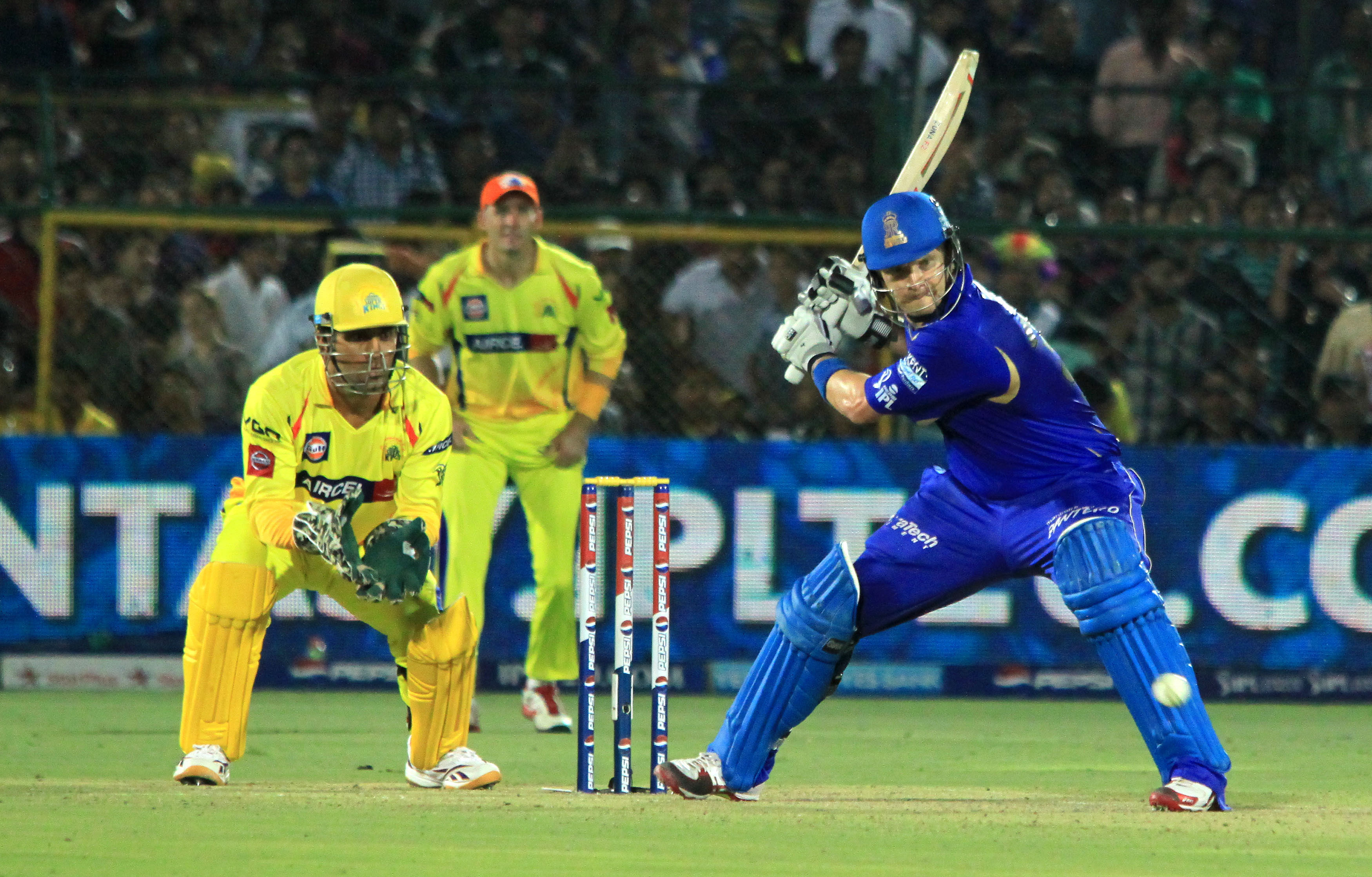 In Super Kings and Royals’ absence, the BCCI had brought into two new franchises- Rising Pune Supergiant and Gujarat Lions.

CK Khanna, the acting president of the BCCI, expressed his delight on the return of two of the most popular teams in the league.

“VIVO IPL will be enriched by the return of Chennai Super Kings and Rajasthan Royals. Both the teams have enjoyed tremendous on-field success and have a mass following. The loyal fans will again get to see their favourite teams and stars in action from the upcoming season of the VIVO IPL,” CK Khanna said.

READ MORE: (‘Cricket Is Big In India And IPL Is Only Getting Better And Bigger’: Reason Behind Vivo’s Huge Bid For IPL Title Sponsorship)

While Rajasthan Royals were the inaugural winners of the tournament, Chennai Super Kings had become the first team to win the title twice. Till now, the Super Kings are the only team to have defended its title when they won back to back titles in 2010 and 2011.

“It is my privilege to welcome back our franchisees, Chennai Super Kings and Rajasthan Royals, into the 11th edition of the IPL. We have had a strong working relationship with Chennai Super Kings and Rajasthan Royals and hope that we can continue to build upon the close ties that we have enjoyed in the past, as we move towards the next edition of the league,” Shukla said.

“I welcome CSK and RR back into the league. I hope they bring back the intensity and the flair that they are reputed for and continue to add immense value to brand VIVO IPL. I wish them, all the very best,” Choudhary said.

The Board of Cricket Control in India (BCCI) have decided to waive off the annual participation fees for the suspended IPL franchises Chennai Super Kings (CSK) and Rajasthan Royals (RR), according to reports from Indian Express.

Both Chennai Super Kings and Rajasthan Royals were handed a two-year ban by Lodha committee after IPL-8 which made them illegible to participate in the ninth and tenth editions of Indian Premier League.

However, former BCCI president Shashank Manohar has asked the two franchises to pay the participation fees if they want to participate in the world’s richest T20 cricket league after their ban.

Both the suspended franchises have moved to Bombay High Court to seek arbitration in the issue as they are not willing to pay the fees as they won’t be participating in the tournament.

However, in the recent BCCI working committee meeting, current president Anurag Thakur announced that the board will waive the fees for both the franchises and also will pay back the first installment which they have already paid the board.

“Yes, the franchise fee issue is now settled. During the last (BCCI) working committee meeting, the president said that the BCCI has reached an agreement with both Chennai Super Kings and Rajasthan Royals and they don’t have to pay the franchise fee.

“There’s no longer any legal issues between the franchises and the board regarding that matter,” Kasi Viswanathan, the Tamil Nadu Cricket Association (TNCA) secretary, told The Indian Express.

Both CSK and RR were banned from Indian Premier League by Lodha committee after their officials’ involvement in illegal betting practices. Chennai Super Kings and Rajasthan Royals were required to a massive Rs 73 crore and Rs 56 crore respectively per year despite being barred from participation but the new decision would be welcomed by both the franchises as they are set to make a comeback to IPL after next edition.

They are banned for two years from the Indian Premier League but that is not stopping Chennai Super Kings and Rajasthan Royals to make their presence felt on social media. The twitter handles of both the disbanded clubs have been very active in showing support for their former players who have joined other teams this season.

From posting group photos of the players in their new team shirts to going down memory lane and congratulating Ravinder Jadeja on his wedding, these two Twitter pages have held on to their past tightly.
Rajasthan Royals and Chennai Super Kings have a huge fan base on twitter with 759 thousand 2.16 million followers respectively.

But the outpour of emotions did not stop there as Pictures of former players of CSK and RR taking group photos found their way to both the team’s twitter pages.

Rajasthan Royal’s twitter handle also shared a group picture of its former players.Their tweet read,”Missing them? Here they are! #HallaBol”

CSK tweeted a congratulatory message to Ravinder Jadeja for his wedding.

And this is how our @imjadeja won over the queen's heart! Lets wish d super couple a wonderful journey 2gether! pic.twitter.com/heQ2qQ4hAW

Almost a week after Delhi Daredevils’ Chris Morris hit eight sixes in an unbeaten and match-winning 82 against Gujarat Lions, Rajasthan Royals posted a picture of the South African in a blue Rajasthan shirt. The picture even bore a Rajasthan Royals hologram.

.@Tipo_Morris hit 8 SIXES vs GL – highest by any player in this IPL so far! pic.twitter.com/Tb4LshmHx6

CSK also made sure to show their support to their diehard fans.  CSK tweeted on their MSD ‘Superfan’ Saravanan who went to Hyderabad to watch Dhoni in the Rising Pune Supergiants and Sunrisers Hyderabad game on April 26.

Not only the team’s twitter handles but also some players have been open about their sentiments for their  former team.  Dwayne Bravo tweeted ‘Brothers for Life #CSK #Champion’ with a picture of him posing with Dhoni and Raina on April 15. CSK’s Twitter handle retweeted it within five minutes.

To all our #CSK fans this one is for you. #Chennai you will be missed #Champion pic.twitter.com/yCBAGo9oCU

MS Dhoni, who captained CSK right from the beginning of IPL , while receiving the Pune jersey said that he was emotionally connected with CSK and it will be quite tough for him to move on.“I would be lying if I say I have moved on,” Dhoni was quoted as saying. “That is the special part of being a human being. There has got to be an emotional connect after eight years (with CSK). After eight years of IPL, it feels very different to play for any other team. All of a sudden if you want me to say that I am very excited to play for a new team, don’t give credit to CSK and the fans for the love and affection they have given us, it will be wrong.”

Irfan Pathan, the former Indian cricketer has shared his first impression of Virat Kohli as a youngster and said that