3 teams who can challenge India at World T20 | Sportzwiki

With the Preliminary stage of the World T20 extravaganza beginning tomorrow, we take a look at the 3 teams who can challenge World No.1 side India at the mega event on their home turf.

MS Dhoni’s side have been in ruthless form right since January, winning 10 of 11 games they have played this year and are currently enjoying a 7-match winning streak. On Sunday night in the Asia Cup final, skipper Dhoni smashed a low yorker from Al-Amin for a huge six to clinch the Asia Cup for his side. There is little doubt that the men in blue enter the tournament as the overwhelming favorites, boasting an enviable batting and a reliable bowling lineup. But which are the 3 teams who can challenge the home side in the World T20.

South Africa have never reached the final of a major tournament, faltering nervously in the knockout stages, most recently in a thrilling semifinal against New Zealand in the 2015 Cricket World Cup. Yet despite their consistently spineless displays in the mega-events, their calibre of superstar players makes a convincing argument for the voodoo and the ‘chokers’ tag to disappear once and for all at the World T20 in India.

With AB De Villiers expected to open with Quinton de Kock and Faf du Plessis coming in at No. 3, the Proteas boast an enviable batting depth with the likes of Duminy and Miller proved performers on Indian pitches, given their involvement in the IPL. But it is their lethal bowling lineup which could rattle every opposition which makes them one of the strongest teams going into the World T20.

Kagiso Rabada, the 20-year old fast bowler, has been a revelation since the tour to India last winter, a bowler who adapted brilliantly to Indian pitches and promises to be a major threat this time around. Throw in the likes of Steyn, Morris, Wiese and Kyle Abbott and you have a formidable seam bowling lineup, in addition to a handy leg-spinner in Imran Tahir who has a knack of picking up crucial wickets. Any weaknesses? Probably the lack of a real quality all-rounder, something which Chris Morris could fulfill if he can step up. 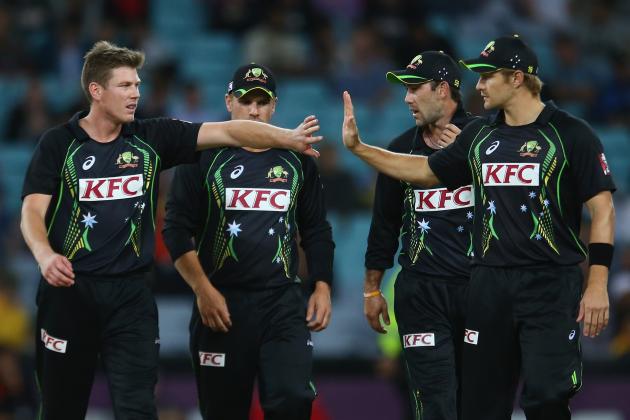 Another team who can challenge MS Dhoni’s side is Steve Smith’s Australia, a fitting reminder of their contention came against South Africa on Sunday when the Aussies chased a total of 204 despite needing a mammoth 160 off the last 13 overs.

With Aaron Finch and Shane Watson opening the batting, and Steve Smith batting at 3, it is David Warner’s demotion in the batting order that could render the Aussies the right balance in India. Warner is a clean hitter of the ball, and someone who likes to attack the spinners in the middle overs and a player of his calibre and experience at No. 4 may just be what the doctor ordered.

Glenn Maxwell produced a comeback to form with a blistering 75 off 43 on Sunday against South Africa in Johannesburg but his weakness against spin could well be a limiting factor for the Aussies.

Australia will sorely miss the wicket-taking knack of Mitchell Starc, and they still need to prove they can play good spin bowling in India. However, they do possess a power-laden batting lineup which has depth and possesses a lot of quality all-rounders in the likes of Mitchell Marsh and James Faulkner, someone who would be expected to finish off games when they get down to the wire. Another team who have had their hiccups against quality spin, particularly in the sub-continental pitches, England still remain a very strong T20 side and one of the favorites for this year’s World T20 in India.

Although they will miss the injured Steven Finn, England have a consistent batting lineup with big-hitter Alex Hales, the baby-faced cavalier batsman Joe Root and skipper Eoin Morgan expected to shoulder the burden of the run scoring. And then come the power-hitting of Ben Stokes and Jos Buttler lowers down the order, with Moeen Ali and Adil Rashid addition admirable batting depth.

Moeen Ali, in particular, is someone to watch out for. A bogey bowler for Team India, Ali could be an important asset for the English side in the T20 mega event. And then there is the leg-spinner Adil Rashid who gives the English side another spin bowling option along with late order batting assurance.

All in all, the English look strong favorites to get out of their group and challenge the big guns in the semifinals.

Eng Vs Pak 2020: Chris Woakes-Jos Buttler Partnership One Of The Best In Recent Past Says Azhar Ali

Chris Woakes Believes England Can Turn The Tables On Pakistan