Batting first, the home team posted a staggering total of 193 for three, courtesy a late carnage by the big Jamaican. Punjab started a bit slow but eventually picked to unleash an onslaught against a recognised Hyderabad attack.

Gayle struck his 21st T20 ton, and the first in this edition, as Punjab almost took the game away. He remained unbeaten on 104 from 63 deliveries with one four and 11 sixes.

Meanwhile, Hyderabad received an early blow when Shikhar Dhawan left the field with a hand injury. Barinder Sran hurried him with extra pace to hit on the arm.

Although Kane Williamson (54) and Manish Pandey (57*) tried their part but a poor start took the game away from them.

As a result, this is their first defeat in the edition, and they will need to cope up with and come back stronger in the next outing.

Here is the players rating of KXIP:

Rahul failed to get his timing right in this game against a decent SRH bowling unit. Meanwhile, he has shown good temperament in this IPL providing good starts to the team.

He registered 18 runs off 21 balls before getting out.

The Universe Boss, Gayle continued his form, as he struck his 21st T20 ton. Punjab banked on him to beat an undisputed Hyderabad side.

The big Jamaican remained unbeaten on 104 runs off 63 deliveries including one four and 11 sixes. The veteran all-rounder had no role to play in this tie against Hyderabad.

However, he needs to hit the form quickly to retain the spot in the team.

Finch finally opened his account in this IPL after getting out on two consecutive ducks.

The Australian opener remained unbeaten on 14 from six deliveries with one four and a six.

Nair provided good support to Gayle, as he went on with the carnage. So far, the right-handed batsman has had a good tournament with Punjab.

He played a secondary to Gayle scoring 31 runs off 21 deliveries.

KXIP skipper had a very bad day in business, as he gave away plenty of runs. Ashwin returned with none for 53 in his quota of four overs.

However, he led the side extremely well, as they handed Hyderabad their first defeat of the season.

The pace bowler from Australia has finally found his form back for the Punjab side. After a couple of faulty performances, Tye struck in the all-important clash.

He returned with two for 23 in his quota of four overs. 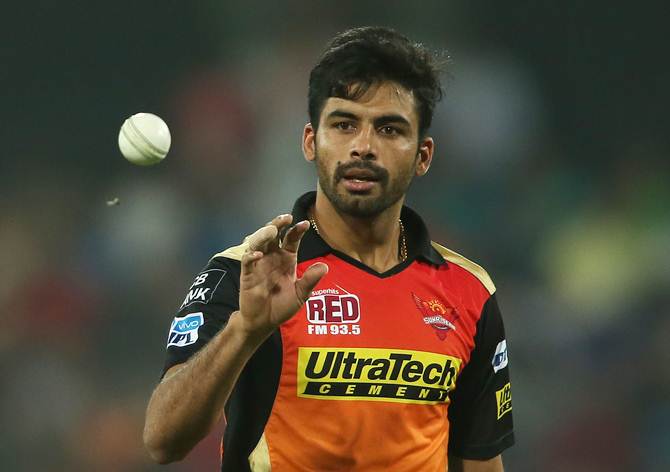 The left-arm pacer was spot on with his line and length. Sran bowled with great pace, as the batsmen found it tough to get away with him.

He returned with none for 22 in his four overs against an accomplished SRH’s batting.

Mohit was very expensive today, as he gave away 51 runs using his full quota. However, he picked two crucial wickets to put a brake on Hyderabad’s innings. Meanwhile, he will look to be more economical in his upcoming outing.

Mujeeb continued his good show with the ball for the Punjab side. He has been economical thoroughly and has contained the free flow of runs in the middle-overs.

The spinner from Afghanistan returned with none for 27 in his four overs.