Barcelona’s players would support the appointment of Juan Carlos Unzue after Luis Enrique’s assistant emerged as a contender to land the manager’s job at Camp Nou this summer.

Speaking at various events on Wednesday, Andres Iniesta, Gerard Pique and Ivan Rakitic all offered their backing to the candidacy of a man who knows the club – and especially the current squad – inside out. 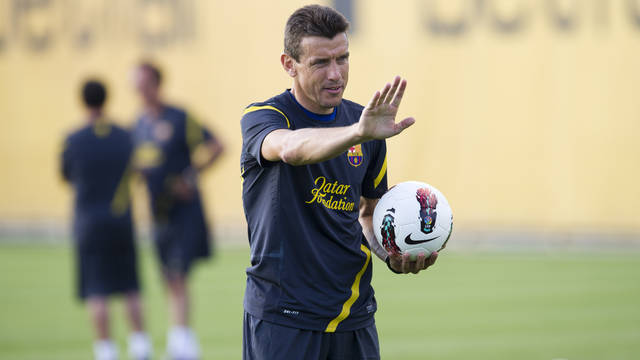 Sporting director Robert Fernandez has revealed he would prefer the next Barca manager to have experience and knowledge of the club and Unzue ticks both of those boxes.

Currently part of Luis Enrique’s coaching staff, he previously worked as the first team’s goalkeeping coach under Frank Rijkaard and then Pep Guardiola and had previously spent two years with the club as a player at the beginning of his career.

Diario Sport reported this week that his options of getting the job have strengthened inside the club after the remarkable comeback against Paris Saint-Germain as they feel hiring him would represent continuity in a move similar to the one which saw Tito Vilanova replace Guardiola in 2012.

“He’s already worked as a coach in the past,” Iniesta said at a TAG Heuer promotional event in reference to Unzue’s oft-forgotten spells in charge of Numancia and Racing Santander.

“There’s still time to go before we know who will be the manager, but Juan Carlos knows how everything works. He is with us every day and like I said he has coached other teams, too.

“He’s a well-prepared, capable coach and at the moment he’s looking forward to ending the season well and hitting our targets.

“The club will decide [on the new manager], but [whoever it is] will have everyone’s support.”

During a talk on nutrition at Casa Ametller Origen, Pique added: “Unzue’s capable of doing the job.

“He’s spent many years here, since Guardiola’s spell in charge and before that as a player. I’m sure he would be a good candidate, but it’s not up to me to choose, that’s not my job.”

Speaking later on Wednesday to Cadena Ser, Rakitic also offered support for Unzue, who is currently reported to be competing with Ernesto Valverde for the job.

“I have a really good relationship with Unzue,” Rakitic said. “He knows us all and we have complete confidence in him. Luis Enrique has his coaching team, but Unzue has his ideas. The philosophy is the same, but each manager adds their own touches.”

Sevilla coach Jorge Sampaoli was another of the early favourites but back-to-back league draws and Champions League elimination over the last week have seen his stock fall.

However, despite reports ruling him out of the running, Sampaoli remains hopeful of getting the job, however slim the chances.