Cristiano Ronaldo, who joined Juventus from Real Madrid in the 2018 summer transfer window is all set for his debut in Seria A.

After winning the Champions League for the third time in a row, Cristiano Ronaldo hinted he wants to move and take a new challenge. And it didn’t take long to finalise his decision.

Ronaldo’s transfer cost 100 million, and he is all set to mark his place in Seria A after proving himself in the English Premier League and La Liga in the past.

However, the Portuguese captain gave an interview to Juventus TV and talked about his life so far in Turin. Ronaldo also revealed since he was a child, he wanted to play for Juventus one day.

“It’s a great club, first of all. Since I was a child, I knew this team, and I hoped that one day I could play there. Now I will play for a fantastic club, one of the biggest clubs in the world. I’m happy.”

It all began when Ronaldo scored a stunning volley against Juventus in the Champions League, and the fans in Turin gave a standing ovation to the former Madrid player.

However, Cristiano Ronaldo didn’t agree to accept this was the reason for his new club, but he admitted it was a beautiful feeling.

“It was amazing. Something like that had never happened to me. When you play in the Champions League quarterfinals against Juventus, you can see signs, and the whole stadium applauds you — it’s incredible. It was a beautiful feeling. … I do not say that it was the [reason for signing], but it helped to see that people appreciated me. In that case, the sensations are completely different.”

When asked what’s his goal at his new club, Ronaldo said,

“My priority is to do my best, be professional, try to make the team even better. That’s my job. I’ll try to enjoy it as much as I can and make Juventus even better.”

Juventus will play their first match against Chievo on 18 August.

Kepa is Not Good as Courtois at the Moment - Maurizio Sarri

Doing everything to keep boxing in Olympics: AIBA President Rahimov 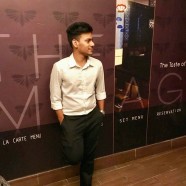 A passionate guy for whom cricket and football is not just a game and tries to interpret all the emotions through his writings.

Will always cherish my days at Liverpool: Coutinho

Where next for Pep Guardiola? We analyze in detail – Sorry Chelsea