On the night I of WrestleMania 36 on April 4, we have seen perhaps the most innovative matchup of recent times in WWE. Amid the coronavirus pandemic, two veteran names delivered an instant classic. AJ Styles and The Undertaker shocked the WWE Universe with their unique Boneyard Match that stood out amongst all the rest of the matches hosted at the showcase of immortals, this year.

While talking to WWE’s The Bump on Youtube, AJ Styles stated that he believes that match brought out a different side to himself and The Undertaker that WWE Universe had never witnessed.

Just like the bygone Money In The Bank ladder matches, this past Sunday’s, the match received a full-on cinematic treatment that brings fresh content in WWE programming in comparison to the monotonous tapings being aired from the WWE Performance Center in Orlando, Florida.

“I definitely think it was a different side of AJ Styles, and not only Styles but The Undertaker, obviously,” AJ Styles stated on WWE’s The Bump. “Not only is the Money In The Bank match unique, but so was the Boneyard Match. It was different.”

The Phenomenal One also stressed on the fact that wrestling aka the whole sports entertainment business is going through a tough phase during this COVID-19 outbreak, where giving something different to the fans were much needed,

“I gotta be honest with you guys, I can’t take credit for you know, the situation that we’re in. We were put in a position to be put in an unbelievable encounter, The Undertaker and I. The situations are what they are. Again, you take advantage of them.”

Ever since coming back from the one-month hiatus after SummerSlam, we’ve seen AJ Styles taking shots against The Undertaker for the WrestleMania loss. He even also spelled out having unfinished business with the Deadman hinting a rematch. 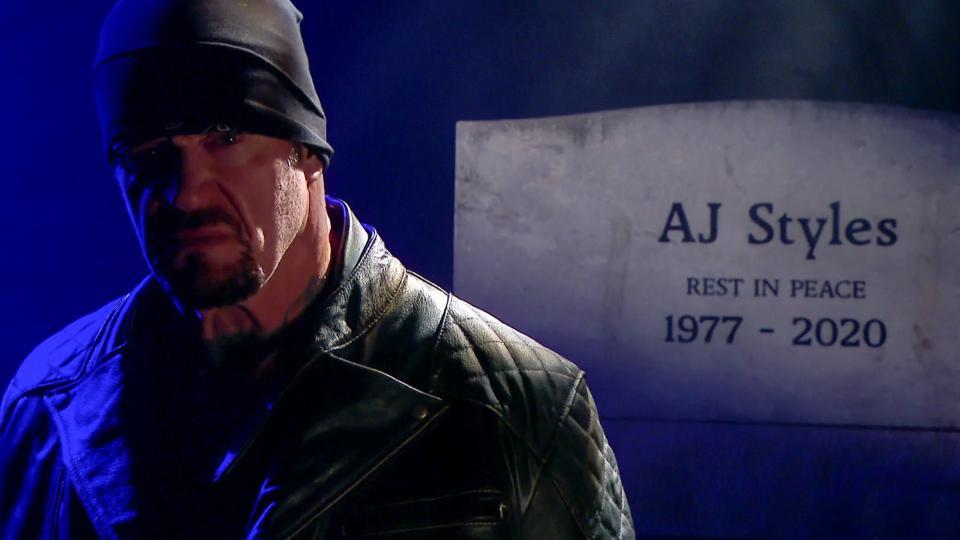 When asked if he would like to face The Undertaker, again in the future, Styles seemed absolutely ready for it,

“If there’s ever a chance for me to get my hands on The Undertaker again, I would gladly take him out, no problem,” Styles answered. “Obviously, it is a problem, but I’m looking forward to it.” (Quotes courtesy wrestlingINC.com)

Chances are really positive at this point to witness a rematch between AJ Styles and The Undertaker following a spot at Money In The Bank. AJ went looking for Rey Mysterio and opened up a door to a room that was specifically decorated for The Undertaker.

It had his signature colors, music, and casket. AJ Styles had flashbacks in mind from the Boneyard Match before Aleister Black kicked him into the room by Aleister Black.