Rob Gronkowski dropped the WWE 24/7 title to R-Truth in his own house backyard on this week’s episode of WWE Monday Night RAW. Gronk was possessing that gold since he pinned good friend Mojo Rawley during the night two of WrestleMania 36 this past April. As reported earlier, WWE booked him to lose the title because his time with the company has come to an end. 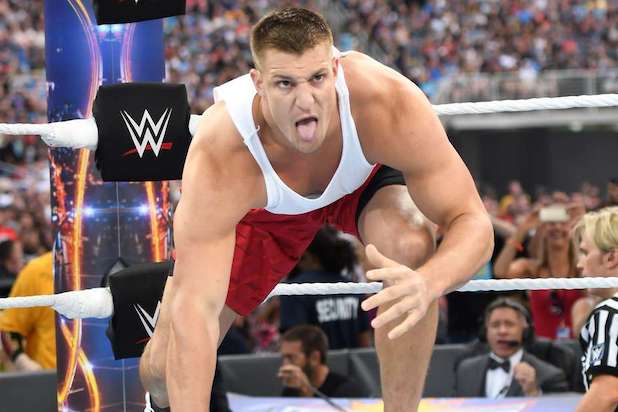 WWE provided him with a release clause that he exercised to get out of the pro-wrestling industry, as early as possible. Apparently, Rob Gronkowski wasn’t a fit to the business who ended up digesting a lot of heats from the WWE superstars during his WrestleMania appearance. It was his second night on the tapings within the company where he infuriated some of the talents.

Coronavirus Pandemic: Top 5 Plans WWE Had To Cancel In 2020

Fightful reported that people they’ve spoken to “had negative things to say about working with Gronk after his WrestleMania fiasco.” We saw Rob Gronkowski performing a dive from the balcony inside the WWE Performance Center that helped him to pick up the 24/7 title but he denied to perform it, initially.

Vince McMahon, at his age of 73, had to perform that dive from the balcony because Gronk didn’t feel safe while doing it. It was that same dive that got leaked out which a lot of fans thought of seeing at 2020 Money In The Bank that went down from the WWE Headquarters. The incident made it pretty clear that Rob Gronkowski was perhaps not made for the pro-wrestling business.

“There was heat on Gronkowski after his hesitation to do his scheduled spot put the WrestleMania filming two hours behind schedule. One top name on the roster called Gronk “A F*ckin’ clown who we are so much better off without.”

Later, Rob Gronkowski was traded to the Tampa Bay Buccaneers to resume his football career and his professional wrestling future was thus sealed. The Bucs didn’t want him to be seen inside the squared circle even if WWE has only booked him for three events, to begin with.

During Wrestling Observer Radio, Dave Meltzer added that WWE signed Rob Gronkowski to work only in three big events. He performed the first one of them which was at WrestleMania 36. Moving forward, WWE planned to use Gronk at SummerSlam 2020 or the next show set for Saudi Arabia. But with Gronk’s those future appearances can be ruled out.