Dwayne ‘The Rock’ Johnson is one of the most popular figures in the history of the professional wrestling business if not the most. Moving on from his wrestling career, he has gone on to pursue a career in Hollywood and earn immense success, there, too. Over the years, he had become the highest-paid actor in the Hollywood industry.

There’s no denying that he is a huge Box Office draw. Being one of the previous franchise figures of the WWE, The Rock could always claim a customized WWE Championship belt of his own, similar to what John Cena or Stone Cold Steve Austin had received. But that never happened and there’s an interesting story behind it.

The story of why The Rock had never got his own customized Championship belt in WWE is somewhat unbelievable which was revealed via a new television series, WWE’s Most Wanted Treasures, recently premiered on American network A&E. While speaking to Entertainment Tonight, Stephanie McMahon talked about many items that are currently stored in WWE’s warehouse.

One of those items is The Rock’s Brahma Bull Championship belt. It was supposed to debut on television during his iconic feud with ‘Stone Cold’ Steve Austin. While the latter was able to unveil the broken skull edition of the belt, his adversary could never bring his own version as this one was actually lost in the mail for a couple of weeks. As a result, the idea had to be scrapped.

“Here you have The Rock’s Championship belt, the Brahma Bull belt. Now, what’s interesting about this is it’s actually never seen the light of day. It’s never been on television. This is really a premium, one-of-a-kind artifact, and it was created during The Rock and Steve Austin’s storyline. Stone Cold had the Smoking Skull belt, and then it was, ‘Well, should The Rock have his own Championship belt?’ and of course yes,” Stephanie stated.

“This was created, lost in the mail, believe it or not. During those two weeks that it was lost, the decision was made to scrap the whole thing, and The Rock never got his own customized Championship belt, but here it is.” 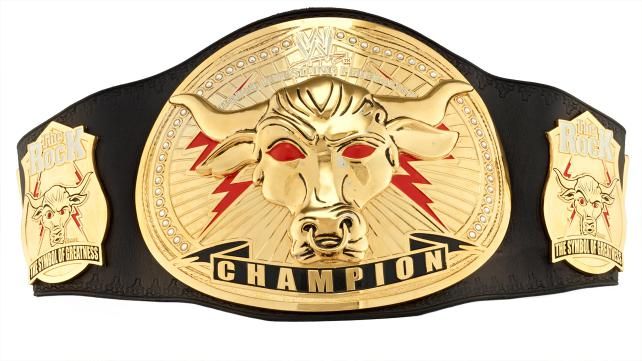 With the custom-designed belt, the feud between The Rock and Stone Cold could have played out in a far different manner but that’s just an imagination, at this point. Regardless of the introduction of the belt, The Great One did pave his way to have one of the greatest careers one could have wished for. With all the accomplishments he had in WWE, it would certainly earn him a spot in the prestigious Hall of Fame, someday.