The South African team, Dolphins becomes the first team to eliminated from the CLT20 main tournament after they recorded third consecutive loss with latest been against Lahore Lions for whom the win was a much needed in aspect of their qualification to semis.

Lahore interesting chosed to bat after winning the toss and soon it didn’t look not to be going on their way. Birthday boy Frylinck struck twice up front sending back the openers. Abbott and Delport put their hands in reducing Lahore Lions to 34 for 4. But a rebuilting stand from Umar Akmal and Saad Nasim as the Lions looked to aim big. The both bastmen shared a stand of 92 in just 53 balls before Nasim was caught up by Frylinck for 43. But Umar Akmal continued to score well and ended unbeaten on 45-ball, 75 helping his team to end on 164 for 5.

Chasing 165 to stay alive, Dolphins weren’t off to a great start as they lost crucial wicket of Delport in first over. That wasn’t restricted to a wicket as the top order failed miserably except van Wky and Vandiar who got starts but failed to convert. With Spinners striking regularly, Dolphins were down to 93 for 9 and were on verge of conceding a big win for lahre, which can help them. But Birthday boy, Robert Frylinck had some other ideas as he tried to smash every ball. He brought up his fifty in just 20 balls and made equation to 31 needing of last two. But bowling a spinner in penultimate over helped Lahore as Dolphins failed to pull back and lost by 16 runs.

13 Runs from 1 ball -Sourav Ganguly does it in Style 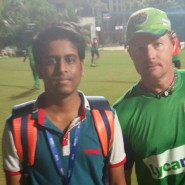