This week’s AEW Dynamite marked the first episode for 2022 for All Elite Wrestling which also marked the debut of the company on the TBS Network. The first episode on TBS witnessed the crowning of a new AEW TBS Champion in Jade Cargill in the finale of the TBS tournament where the winner toppled Ruby Soho to achieve the major accolade.

Then in the main event of AEW Dynamite, Lucha Express (Jungle Boy and Luchasaurus) won their first-ever AEW Tag Team Championships as they defeated The Lucha Bros (Rey Fenix and Penta).

The match was filled up with several big spots including a huge chokeslam off the ring apron through a table from Luchasaurus to Rey Fenix. The Lucha Bros offered everything in their arsenal but they were unable to put away The Jungle Express on this occasion.

The final moments of the match witnessed Jungle Boy and Penta El Zero hitting each other with reversal moves. But as Penta went for a made-in-Japan driver, Jungle Boy reversed the maneuver and somehow managed to receive the 3-count.

After the match on AEW Dynamite was over, Christian Cage, the mentor of the new AEW Tag Team Champions came out to the ring and congratulated Jungle Boy and Luchasaurus’ for the win. Jungle Boy’s relatives were also at ringside who started getting emotional at the sight, including Jungle Boy’s mother.

As the new champions continued to celebrate, almost all the tag teams from AEW Dynamite came out to the ramp as they have their sights firmly set for AEW Tag Team Champions. The Acclaimed, reDRagon (Bobby Fish and Kyle O’Reilly), and many more teams were seemingly ready to get a shot at the tag belts. 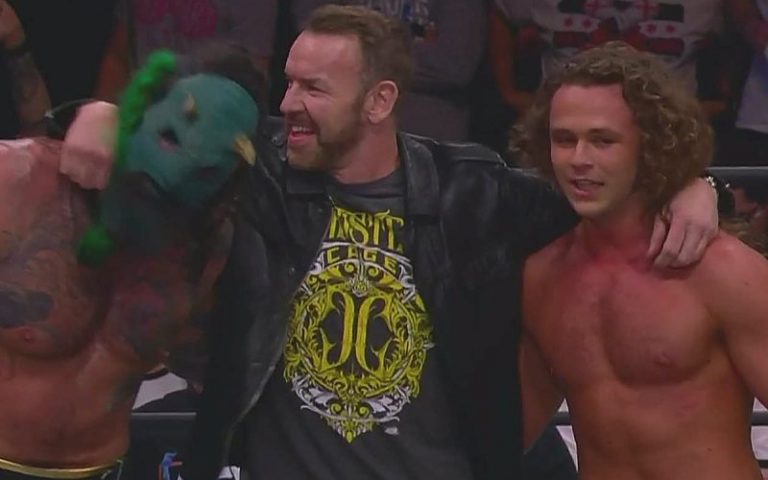 Even Chris Jericho and Malakai Black, fka Aleister Black in the WWE also looked on from different areas of the arena as Jungle Express celebrated their win. Perhaps the two men will find their own respective partners to go after the Jungle Boy & Luchasaurus who have now clinched their first major title win in AEW. As for the former champion, Fenix was injured from a table spot. Reports suggest that he was taken to a nearby hospital with a broken arm following AEW Dynamite.