AEW Grand Slam 2021 was presented last night touted as the biggest Dynamite episode in the history of All Elite Wrestling. Daniel Bryan competed against Kenny Omega in his first match under the AEW banner. The main event match featured Britt Baker defending her Women’s Title against Ruby Soho.

CM Punk was in attendance on the night where legendary Sting also featured in tag team action. Check out the results from AEW’s weekly show that took place at the Arthur Ashe Stadium in Queens, New York.

– AEW World Champion Kenny Omega vs. Bryan Danielson in a non-title match opened AEW Grand Slam and it ended in a 30-minute time limit draw. Adam Cole and The Young Bucks attacked Bryan after the match and this led Christian Cage, Jungle Boy, and Luchasaurus to come out to make the save for Bryan. – CM Punk appeared for a promo session and said targeting PowerHouse Hobbs who tried to end his career, last week. Punk told that Hobbs made a mistake by not breaking his neck which is why he’s now coming for him and will put him to sleep this Friday night on AEW Rampage.

– MJF defeated Brian Pillman Jr. in the next match of AEW Grand Slam. Pillman looked for a springboard, but MJF caught him with the salt of the earth (fujiwara armbar) in the middle of the ring as Pillman had no choice but to tap out. 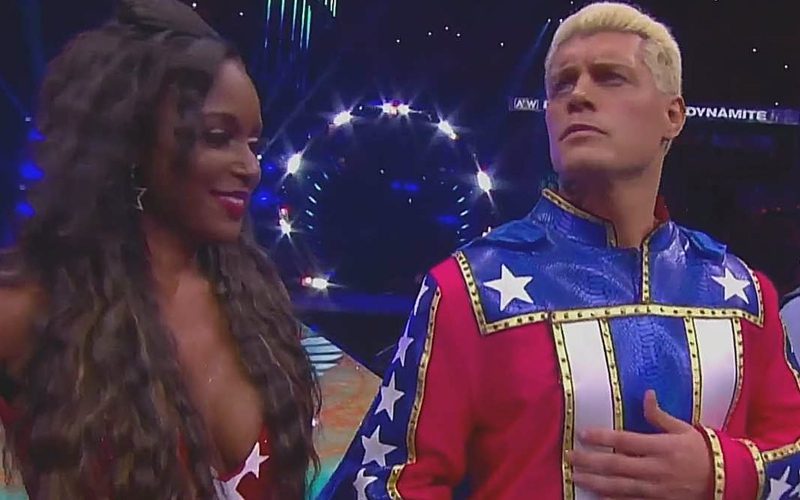 – Malakai Black defeated Cody Rhodes in the second match of their ongoing feud. Brandi Rhodes made her return at AEW Grand Slam as she walked her husband to the ring. Rhodes connected with the Cross Rhodes when Arn Anderson tried to distract the referee and he slipped off the apron. As the referee was distracted Cody was sprayed with the Black Mist by Black. Black then covered Cody for the win.

– Sting and Darby Allin defeated FTR in a tag team match. In a spot from the match, Dax Harwood mocked The Undertaker by doing the “throat slash” sign and picking up Sting for the Tombstone Piledriver but he was unable to hit it. Sting made Cash Wheeler tap out with Scorpion Deathlock while Allin stopped Dax from making the save.

– Dr. Britt Baker, D.M.D. (c) defeated Ruby Soho to retain the AEW Women’s World Championship in the main event of AEW Grand Slam. Rebel and Jamie Hayter got on the apron during the closing segments that allowed Baker to apply the lockjaw submission on Soho for the submission win.