Booker T was last seen in WWE competition, almost nine years ago, although he’s said time and time again that he could be back if the company ever needs him. Now, it seems he’s gunning for a huge match against a WWE Hall of Famer that could also earn him a lot of money since it could be hosted in the middle-east country in a huge pay-per-view event.

WWE’s deal with Saudi Arabia has already produced a few dream matches whether people liked it or not. The high-dollar price tag for those events helps the company to make set-ups that are no less than WrestleMania events. Booker T seems more than ready to receive a huge paycheck by featuring in one of those shows in a big rematch. 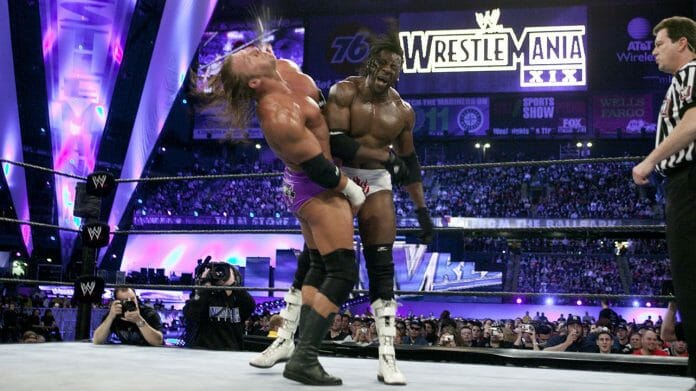 During Booker T’s Hall of Fame Podcast, the veteran discussed the idea of competing in another match against Triple H. He still feels that their big match WrestleMania 19 rubbed him the wrong way. He reminded the listeners of the podcast that there were some of the WWE officials who told that Booker should have won that match against Triple H.

It seems that Booker T is certainly ready to take on The Game in Saudi Arabia if he receives a lucrative amount of money.

“If Booker T vs. Triple went down, it would have to be in Saudi [Arabia] because [WWE] are passing out big checks [to wrestle there],” Booker T said. “For me to get in the ring, the situation would have to be right. I would want to get paid. Somebody might say I’ve wrestled at my place, and yeah that’s my place and my job to teach my students and show them how it’s done sometimes. But yeah I would love to have another match, situations right, with Triple H.”

“The thing about that match [at WrestleMania 19], of course, the ending wasn’t what most of the majority of the fans that night were wanting. So many people wanted me to win that night, I remember a couple of the office guys said, ‘Book you should have won tonight.’ Well, you wrote it. You had a piece of it, why didn’t you speak up?” (Quotes courtesy Wrestling Inc)

Booker T has a history with Triple H

Apart from the WrestleMania encounter, the King of Kings also featured in a big-time match with the former Harlem Heat member back at SummerSlam 2007. Triple H was coming back from an injury at that point while his opponent was in the middle of his King Booker shtick. WWE’s Cerebral Assassin had to be put over in a big way in that match, too.

We’ll have to see if WWE is listening to his words and eventually books this match in Saudi Arabia. Booker T is one of those old school names who could bring back the perfect nostalgia that the Saudi Arabian fans would love to see. Once the pandemic situation gets over, WWE is likely to revisit the country, two times in a year and the company could recreate the WrestleMania 19 encounter.