Jodi Lynn Calaway might sound unfamiliar to the professional wrestling world but it should raise interest in you as soon as you hear that she is related to The Undertaker. The legendary superstar is often considered to be the greatest sports entertainer of all-time. But when it comes to marriages, he is not that skilful.

As a matter of fact, The Undertaker is one of those very few pro-wrestling athletes who had undergone marriages for three occasions or more. Starting from Jodi Lynn Calaway, he moved on to two more spouses. While the last two of his partners have their own identities, Jodi had less recognition. But this woman spent more than a decade in the Undertaker’s life when he used to be just an ordinary wrestler.

Known with his real name of Mark Calaway, Jodi Lynn Calaway was the first love of his life. Not much is known about the early life of Jodi, but she eventually got married to The Undertaker in the late 80s and had also seen him grow in the world of WWE, then known as WWF aka World Wrestling Federation.

The Undertaker Net Worth, Salary And Career Details

– The Undertaker met her in the early 80s and the duo started dating. They decided to tie the knot at an early age. Taker was just 24 when she got married for the first time with Jodi in 1989.

– Calaway started his career under the WCCW banner in the 80s before moving to the WCW promotion. Then he signed with the Vince McMahon owned WWF brand. It was McMahon who came up with The Undertaker gimmick which was debuted at Survivor Series 1990. During this transformation phase from ‘Mean Mark’ Callous to The Deadman, Jodi Lynn Calaway was by his side. 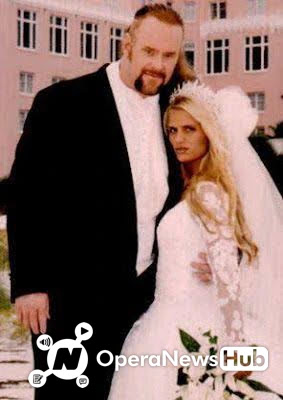 – The couple never decided to bring their lives to the public but rather enjoyed a private life. They were together for ten long years before the relationship cracked.

– In 1999, Jodi Lynn Calaway decided to get separated from Mark. On June 15th of that year, she got legally divorced from the cornerstone figure in the world of pro-wrestling.

– The Undertaker and Jodi Lynn Calaway have a son from the marriage. He was born in 1993 and thus he is now 27 years old who is over with graduation from college.

– Unlike the next two wives of The Undertaker, Jodi Lynn Calaway has never made on-screen appearances nor did she had a connection with the pro-wrestling circuit. Mark has never been seen making a public appearance with her first wife since he was protective of The Undertaker gimmick, anyway. 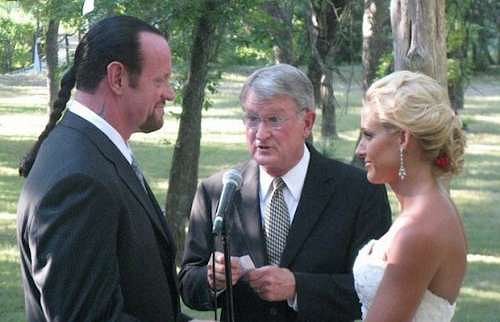 Following the separation, The Undertaker married his second wife, Sara Frank, in 2000. The very next year, Sara made televised appearances with the WWE (then known as the WWF) as part of a feud between Taker and Diamond Dallas Page. During the angle, she was acknowledged as Calaway’s wife. They had two daughters together, Chasey and Gracie Calaway. The marriage was intact until 2007 as the two got divorced.

In 2010, The Undertaker married former wrestler and WWE Divas Champion Michelle McCool. They have a daughter child named Kaia Faith Calaway who was born in 2012.

People often think that the BSK tattoo of The Undertaker might have some connection with Jodi Lynn Calaway since he also inked Sara’s name. But that’s not the case. In the 1990s, Mark started a “posse” called the Bone Street Krew comprising of fellow wrestlers Yokozuna, Savio Vega, Charles Wright, The Godwinns, and Rikishi. Each member had the initials “BSK” (Bone Street Krew) tattooed onto themselves. The Undertaker’s tattoo can be seen prominently shown across his stomach.