Lana will compete for the RAW Women’s Title against Asuka on the season premiere of the show, this Monday Night. The new contender is doing everything she can, on her will power to get in the best possible shape for it. Except for working out, she has taken a pretty exceptional way that has gone pretty viral over the Internet.

I will do anything to become #Raw Women’s Champion !!! Including drinking raw eggs with @yaonlylivvonce !!! (Link in bio ! Watch the full vlog with Liv motivating me!)

It appears that Lana is drinking raw eggs. Her husband recently posted a tweet declaring that she could be compared to Rocky Balboa. Her wife did swipe down some raw eggs like the fictional boxer during her latest training sessions. Liv Morgan was her partner and she could barely believe that it was actually happening. 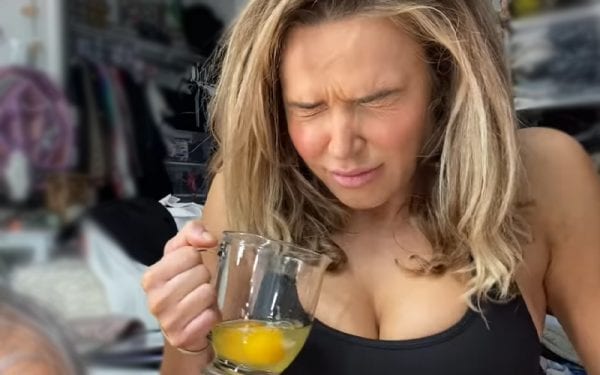 The Number-one Contender for Asuka’s RAW Women’s Championship posted a shorter video as well as some clips from it on her Instagram account of herself drinking raw eggs. She wasn’t able to process the whole jar at once but eventually did it. Lana also mentioned that she’s willing to do “anything” to win the RAW Women’s Title. So drinking raw eggs was nothing to get ready for perhaps the most important match of her career.

Now, this clip has become quite viral over the internet as Lana shared it through all her social media handles. Former WWE host Renee Young saw the clip that the Ravishing Russian put out, and she wasn’t while watching the clip. While seeing her former colleague drinking raw eggs, she almost grossed out,

“This also made me throw up in my mouth.”

@wwe_asuka has LAUGHED in my FACE ! This Monday Night Raw I will become your NEW #RawWomensChampion !

In another video posted on Instagram, Lana was seen breaking a block of wood with a kick while prepping for Asuka. Interestingly, the wood stick had the reigning champion’s name written on it. It’ll be interesting to see how she fairs against Asuka. It’s barely expected that we’d crown a new champion but the challenger is also pretty serious about the encounter.

As seen in this past episode of Raw, Lana won the challenger’s spot by winning a Battle Royal. She left the ring earlier in the match to get planted by Nia Jax at ringside through the commentary table for the fourth time in recent weeks. Lana was never eliminated as she came from behind and eliminated Natalya, to be declared the new number-one contender.