The Death Before Dishonor 2022 conducted by the Ring of Honor promotion will go down, later this month. During last night’s AEW Dynamite, a number of matches for the pay-per-view event were announced, last night. For those who don’t know, AEW President Tony Khan took over the ROH and hence we get to see announcements as well as cross-brand appearances in recent times.

Things around Death Before Dishonor 2022 started to fall into place during Dynamite after weeks of backstage segments featuring Jay Lethal, Sonjay Dutt, and Satnam Singh calling out ROH TV Champion Samoa Joe, the title match has been confirmed. They wanted Joe to defend his title or give it up. Now, Joe is scheduled to return to action on the upcoming PPV against Lethal in a one-on-one matchup. 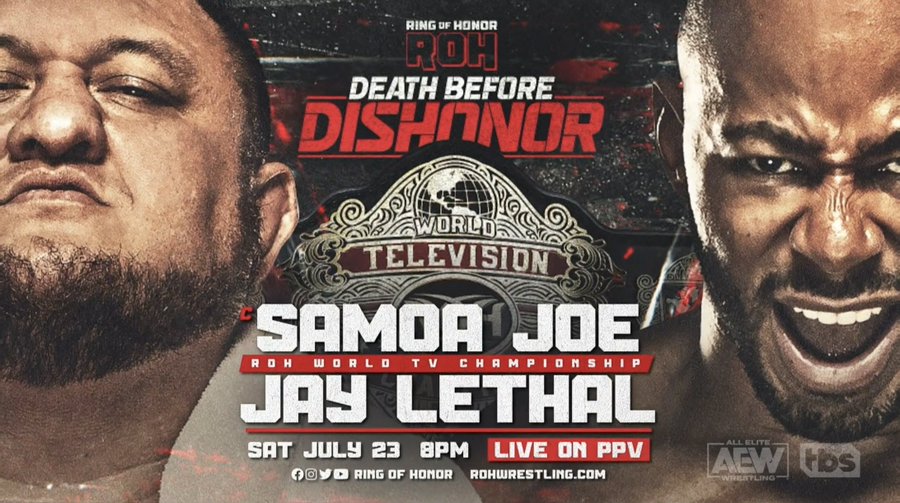 Also announced for Death Before Dishonor 2022, Wheeler Yuta of the Blackpool Combat Club will be defending his ROH Pure Championship against The Jericho Appreciation Society’s Daniel Garcia in another singles contest. The two factions have been involved in a program for the past few months and it seems fitting that it would end with a title match on a special night.

Another huge match for Death Before Dishonor 2022 was when FTR member Dax Harwood and Cash Wheeler appeared in a backstage segment and issued a challenge for the ROH Tag Team Championships to The Briscoes. The teams competed against each other at ROH SuperCard of Honor XV this past April and it’s yet to be seen whether these two teams get booked in a match with both the titles on the lines.

There’s no confirmation on the ROH World Champion’s matchup at Death Before Dishonor 2022 card but Jonathan Gresham will be making his AEW Rampage debut, this week to continue feuding with The Gates of Agony (Kaun and Toa Liona) and Brian Cage. Recent rumors claim that Gresham will put his ROH Championship on the line against Cage at the upcoming event.

ROH Death Before Dishonor 2022 pay-per-view is scheduled for Saturday, July 23, 2022, at the Tsongas Center in Lowell, Massachusetts. The current match card for the event stands as follows,