A massive Triple Threat main event match for the Universal Championship featuring Edge, Daniel Bryan, and Roman Reigns closed WrestleMania 37 – Night 2. At the end of the highly praised clash, the reigning champion prevailed as he retained his title with authority. He would pin both his opponents at the same time for the win.

Seemingly, this was a strong statement made by The Tribal Chief at the Show of Shows who would brag about how people should acknowledge him from now on. WWE’s plan also was to showcase his strength anyway and this was the key point of building up this match, in the first place.

During Wrestling Observer Radio, Dave Meltzer mentioned that the major intention for WWE in that main event match was to make a major statement. They wanted to show Roman Reigns as strong as possible and the plan was successfully executed.

“There is no doubt what their intention is that there is one guy they are push, and everybody else is there to, you know service their one guy. That’s what this match was.” (Transcription by Ringside News)

Edge was highly rumored to emerge as the winner of the Triple Threat by pinning Daniel Bryan and thereby protecting Roman Reigns, in another supposed plan for the Triple Threat. But in the end, it came out that all WWE wanted to make the champion the undisputed heel figure of the entire roster.

The match received high praises from the fans as Fightful Select reported that Paul Heyman was involved in laying out the match, just like he used to do in the past while working with Brock Lesnar. Unlike the other matches featured on the card, the finish of the main event has been decided relatively early. 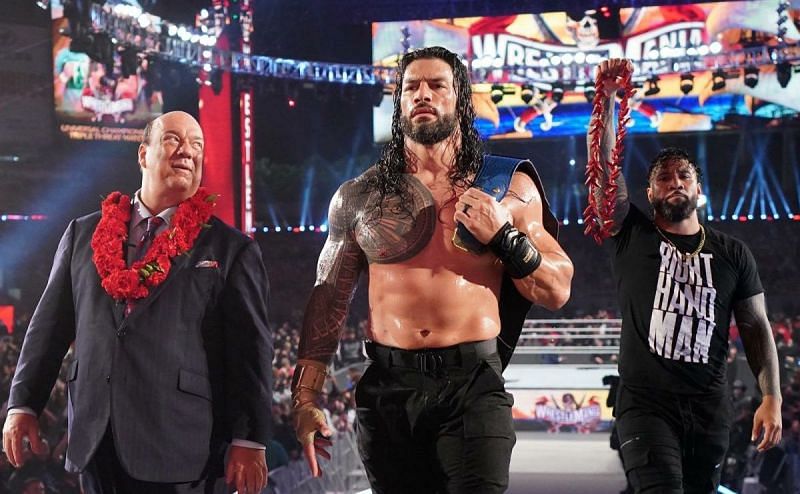 Edge and Daniel Bryan also kept creative inputs, providing ideas for the match. The entire finished product has been noted as a ‘collaborative effort.’ The spot where Bryan had the YES Lock on Roman Reigns while Edge had the crossface on him at the same time was something that Bryan had pitched.

Now, Roman Reigns is still the reigning WWE Universal Champion ruling his yard as the Head of the Table. As seen in a released promo over the coming episode of SmackDown, it is likely that a new challenger will step up to him. There’s no update on who that wrestler is going to be but we’ll find that out this coming Friday night.