WWE Friday Night SmackDown has been experiencing several glitches on the TV screen in the past few months. The fans are dying to know who could be behind those glitches as a mystery hooded hacker was shown just before WrestleMania 36.

Apparently, it could be two people from the blue brand. In this case, sources have not revealed the name but rather enthusiastic fans have decoded the mystery. 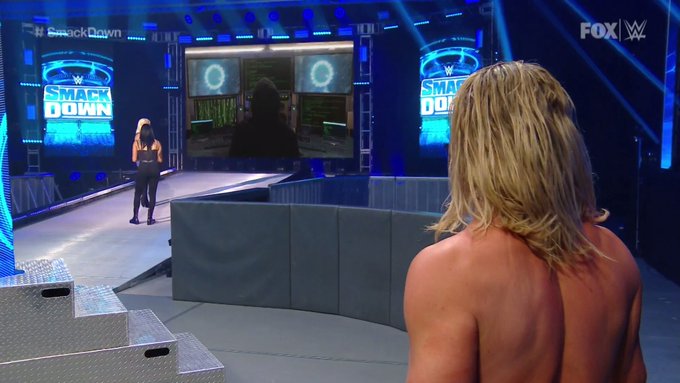 Fans have recently broken down the audio manipulation that WWE’s been using for the hacker’s voice. They discovered that the dialogues belong to both Mustafa Ali and Chad Gable.

It appears to be a huge spoiler and the credits go to the fans. Meanwhile, WWE seems to be well aware of the fact that fans may try to identify the mystery hacker’s voice, and hence they could have wanted to throw people off the track as they try to pinpoint the concerned person.

SCROLL PAST IF YOU DON'T WANT TO KNOW WHO'S HACKING SMACKDOWN.

Credit to Metal Lord – James Lynch (couldn't find their @) for doing the 1st. I turned up the 2nd video by 6 semitones & found something very interesting pic.twitter.com/Uk6xkQv7OU

Both Mustafa Ali and Shorty G have not been seen on SmackDown television for a while, now. Ali has always been the first choice to be resurfacing on SmackDown with a rebuilt-character and the glitches were signifying the same.

Ali’s previous appearances in glowing in-ring gears have been a reason anyway that fans thought him to be the man behind that hood. Only time will tell whether the fans are guessing right or not.

Revealed: How Much Money WWE Is Saving By Releasing 50+ Employees

Meanwhile, WWE Hall of Famer Mark Henry recently revealed that he wants that SmackDown hacker to be CM Punk. It could act as a perfect re-introduction for him, back to pro wrestling. He stated that CM Punk is a legit fighter and he should have come back to become that ‘best in the world’, again,

“‘You want the truth’ I want to give you the truth, and I’ve been around here watching and I’ve exposed the truth at some small levels’ But now I’m going to share the truth on everything.” Mark Henry stated.

It is very hard to expect CM Punk appearing as a mystery hooded hacker on SmackDown while and if he makes a WWE TV return. There’s no positive update available on Punk’s status when it comes to WWE comeback. Vince McMahon is not interested in doing business with Punk. Hence hiring him again in WWE’s payroll might not be a smart decision for the company.