The main event of last night’s NXT TakeOver: In Your House event witnessed Io Shirai defeat Charlotte Flair and Rhea Ripley in a triple threat match to become the new WWE NXT Women’s Champion. It appeared to be a surprise for most of the fans as the former champion was a special attraction on the black and yellow brand who was supposed to receive a lengthy title reign. 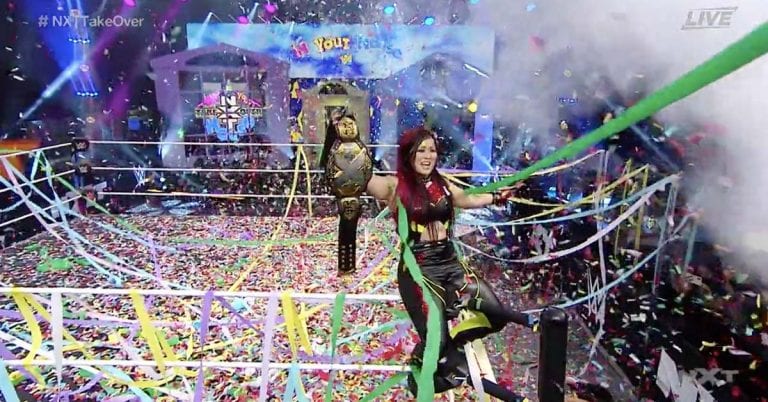 But the shocker finish happened when Charlotte Flair had Rhea Ripley in her devastating finisher Figure Eight Leg Lock. Shirai then hit a Moonsault on Ripley and pinned her to get the win while Flair still had the submission hold locked in.

So, Charlotte Flair can still boast of the fact that she never lost the NXT Women’s Championship as Shirai didn’t pin or submit her. This might also pave the way for a rematch for her against the Japanese superstar in the near future.

But this past Sunday night was not able to bring a pleasant experience for Charlotte Flair, at all. Apart from losing the NXT Women’s Title, she also suffered a nip slip towards the end of the match. The eagle-eyed camera caught the snap at a point when all three opponents were down on the mat.

You can see the censored version of the picture as given here. Meanwhile, Flair is the third name within the past couple of weeks who suffered a wardrobe malfunction on WWE TV despite the ongoing taped shows.

According to the reports from The Dirty Sheets, the reason why Charlotte Flair dropped the title this soon is that WWE needed her on RAW, full-time in the absence of Becky Lynch, who is on an extended hiatus due to her pregnancy reasons.

The face of the women’s division is absent from the scene and the officials needed someone worthy who could replace her and who better to capture the spot than the most trusted shoulder of Vince McMahon.

It is also being reported that Charlotte Flair is now going to be used in a future RAW Women’s Championship program against Asuka. A story has been going on between them, where Asuka has never defeated Charlotte Flair in a one-on-one bout.

At WrestleMania 34 and SmackDown 2019, Asuka lost to The Queen on two separate occasions with the SmackDown Women’s Championship hanging in the balance.