Shane McMahon has openly thrown a challenge to The Undertaker to a Hell in a Cell rematch. This happened during this week’s episode of The Last Ride Post-Mortem on the WWE Network. The Post-Mortem show airs after each of docuseries based on The Undertaker: The Last Ride. The most recent episode was the fourth installment that aired immediately after the Backlash pay-per-view event.

The episode presented some unseen footage from Extreme Rules 2019 where The Undertaker teamed with Roman Reigns to defeat the team of Shane McMahon and Drew McIntyre in a No Holds Barred tag team match. While appearing on the Post-Mortem show, Shane McMahon let knew how The Deadman believed that match was going to be his last ever.

But then again Shane McMahon didn’t stop bringing the etch, back to The Undertaker by offering him a mouth-watering match. Thus, he ended up showing interest to him for another matchup against the greatest sports entertainer inside that demonic steel cage structure. 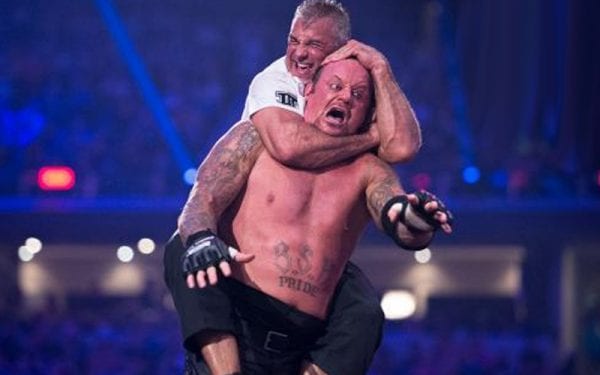 Shane McMahon and The Undertaker faced inside the in a Hell in a Cell structure back at WrestleMania 32 in 2016 where the latter would emerge, victorious. Last year, McMahon’s heel-turn led to a rivalry against Roman Reigns where Taker joined to form a dream team at Extreme Rules. McMahon hasn’t been involved in WWE’s storyline perspective since his feud with Kevin Owens that ended in 2019.

As for The Undertaker, although he believed that Extreme Rules 2019 was going to be his final match, he responded positively in Vince McMahon’s call, earlier this year by agreeing to wrestle AJ Styles at WrestleMania 36. These two stole the show in a unique Boneyard Match.