WWE aired the 2020 Money in the Bank PPV event, last night in the most unique way possible. Both the men and women’s division ladder matches went down simultaneously from the roof of the headquarters bringing a never-before-seen experience. Apart from these two main event attractions, multiple championship matches from both Raw and Smackdown were also on the card.

Check out the results from the show, 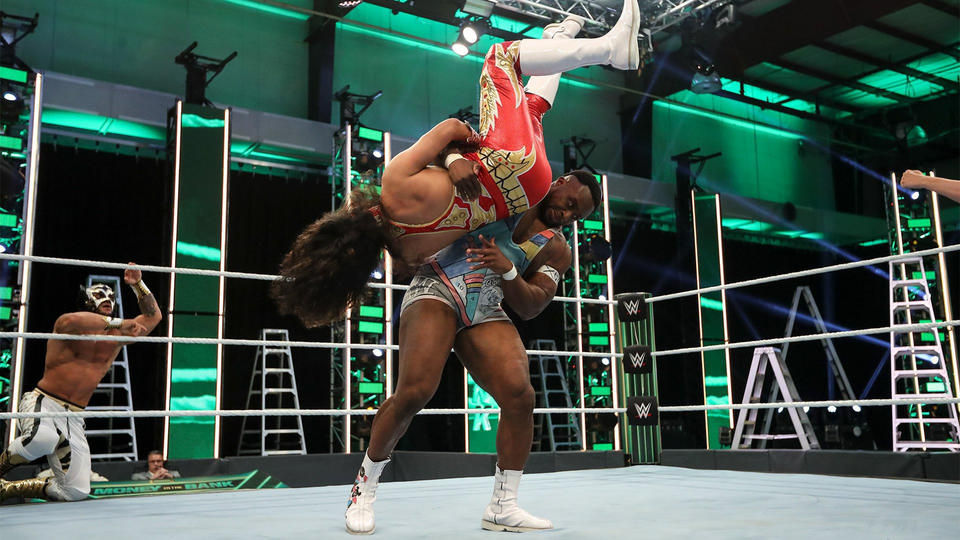 Fatal 4 Way for the SmackDown Tag Team Titles
The Forgotten Sons vs. John Morrison and The Miz vs. Lucha House Party vs. The New Day (c)

Gran Metalik of Lucha House Party was in full control of the match by the finish when Big E charged towards him but Jaxson Ryker helped E to hit the floor. Inside the ring, Kofi Kingston hit the Trouble in Paradise on Dorado as E neutralized Metalik outside the ring. E then hit the Big Ending on Dorado to retain their titles at Money In The Bank.

The action is already off the charts at #MITB with the #SmackDown #TagTeamTitles on the line!@WWEGranMetalik & @TheRealMorrison look to SHOCK and AWE! 😲 pic.twitter.com/eG0gQCP61q

After R-Truth appeared at Money In The Bank to compete for the scheduled match with MVP, Bobby Lashley suddenly interrupted to volunteer himself to replace MVP. Lashley hit a Spinebuster followed by a Spear for a quick win.

.@fightbobby’s version of ballin’ is a little different. #MITB

Tamina overpowered Bayley throughout the match until she was targeted into the knees. The challenger came back with a Superkick and Samoan Drop but couldn’t capitalize as Sasha Banks distracted her from ringside. Tamina ran after Sasha when Bayley interfered and rolled her up for the pinfall win.

Get you a best friend like @SashaBanksWWE is to @itsBayleyWWE. #MITB pic.twitter.com/7wD5gZeBWt 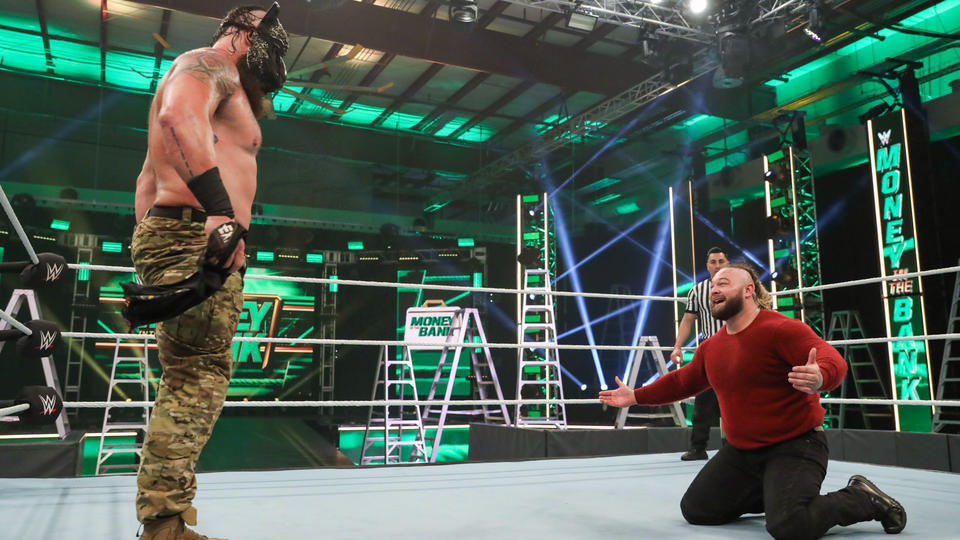 Wyatt capitalized on Huskus Pig’s distraction at ringside and hit Strowman with Sister Abigail. Strowman soon hit him with a Chokeslam and then wore the black sheep mask pretending that he’d be joining Wyatt. It was a hoax to feed Wyatt with a Running Powerslam which allowed Strowman to retain the title at Money In The Bank.

Is this really happening? 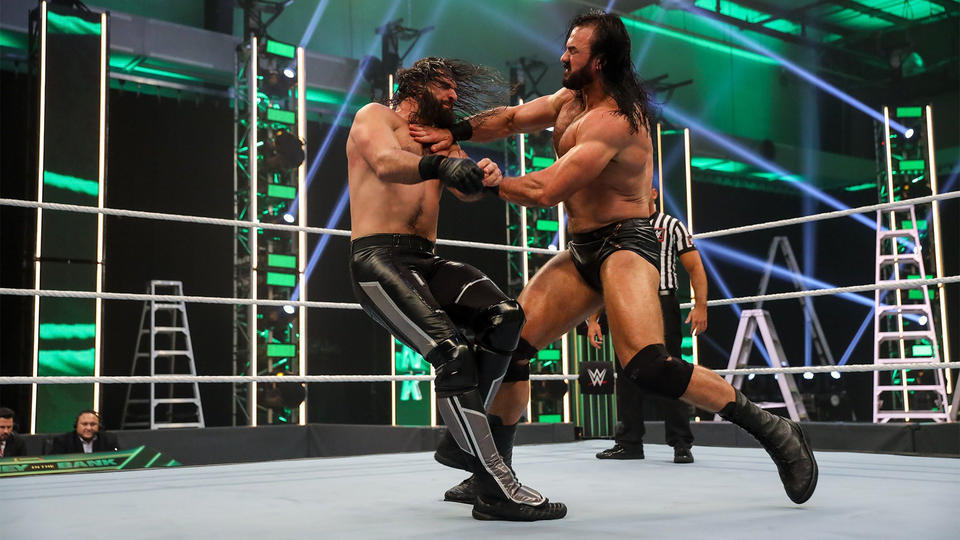 Seth Rollins hit a Superplex followed by the Falcom Arrow for a two-count. McIntyre countered with the Futureshock DDT and a suplex. While going for the Claymore, Rollins caught him with a Superkick followed by a Stomp. McIntyre kicked out of that and gave a Headbutt to Rollins and then nailed him with the Claymore Kick to successfully defend his title at Money In The Bank.

Starting to think this just might be @WWERollins' destiny. #MITB pic.twitter.com/daZLYEXODi 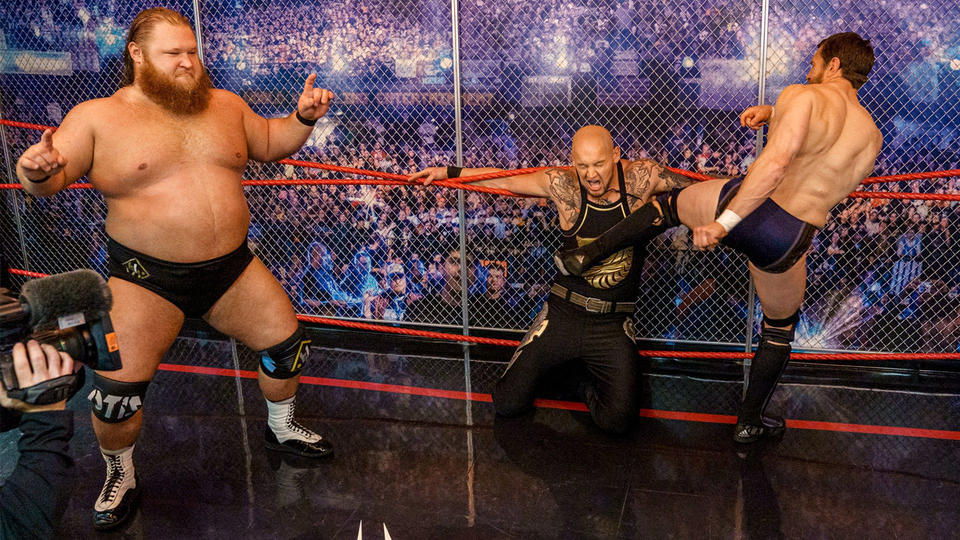 Women’s Money In the Bank Ladder Match
Nia Jax vs. Asuka vs. Shayna Baszler vs. Dana Brooke vs. Lacey Evans vs. Carmella

Men’s Money In the Bank Ladder Match
Aleister Black vs. Rey Mysterio vs. Daniel Bryan vs. King Corbin vs. Otis vs. AJ Styles

Both the Money In The Bank ladder matches was in progress at the same time which were entertaining. Vince, Stephanie McMahon, Paul Heyman, Doink the Clown, John Laurinaitis, Brother Love, and more made cameo appearances during the match. The women were the first to reach the roof. Asuka sent Evans to fall off a ladder onto Nia Jax. Corbin was climbing the ladder but Asuka kicked him off the ladder and grabbed the Money In The Bank briefcase to become the winner.

This is already the greatest thing we’ve ever seen. #MITB

Foiled by the #MITB conference room!@StephMcMahon just broke it to @DanaBrookeWWE that the REAL contract is on the roof. pic.twitter.com/JFiph4poJA

The men’s division match continued as Corbin threw Mysterio and Black off the edge of the building! AJ and Corbin started climbing the ladder at the same time but Elias appeared out of nowhere and whacked Corbin off the ladder. Styles unhooked the briefcase but it accidentally fell into Otis as he becomes the men’s Money in the Bank winner.

BEST CAMEO OF ALL TIME! #MITB