Natalya To Feature In A Marital Problem Angle On WWE Raw?

WWE loves to try out storylines with different flavors and it seems like they might be getting something unique for Natalya. It will be consisting of a real-life angle that would also feature her husband Tyson Kidd who used to be a former wrestler in the WWE.

Back in the days, he had to retire from the circuit due to a neck concussion but if the angle is getting built then he will soon be back on Monday Night RAW. 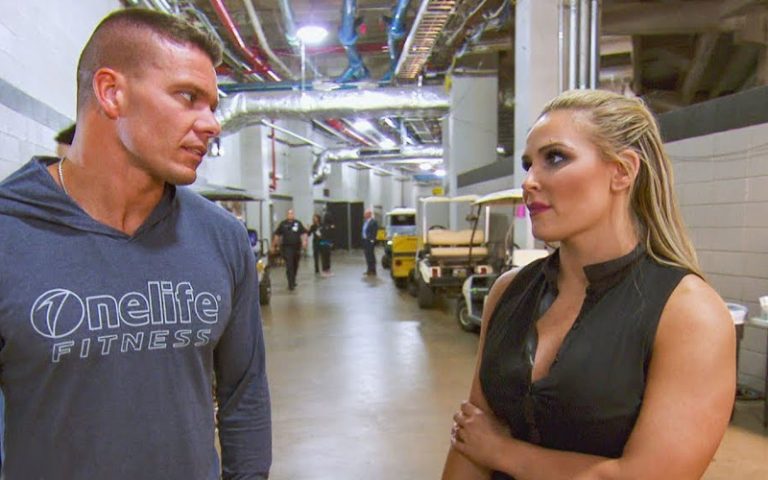 As seen in this week’s episode of WWE RAW, Natalya was giving an interview while gearing up for the number one contender’s triple threat match also starring Nia Jax and WWE NXT Women’s Champion Charlotte Flair. But Natalya seemed to have troubles with her home life which got in the way. Her phone started ringing and she had to take it halting the promo in the middle that was weird.

It was her husband Tyson Kidd on the other side. It was not revealed what Tyson had to say, but Natalya didn’t sound happy after the conversation. It appears that WWE could soon be starting a storyline where Natalya will have to deal with marriage issues. She was eventually back for the interview but Charly Caruso informed ber that they had run out of time. Thus, Nattie didn’t look happy, at all how things went down on TV.

It is interesting to note that Tyson Kidd works backstage in WWE as a producer. So he could have been present at the WWE Performance Center in Orlando during this week’s Raw tapings but he wasn’t shown on the screen. Since retiring, Tyson Kidd goes by his real name, TJ Wilson. Hopefully, WWE would use it in a bigger way than just be a producer as he gets ready to resurface on WWE television, very soon.

For those who have forgotten, Natalya has managed the tag team formed by Tyson Kidd and Cesaro, five years ago. They have also won the tag team championships.

The next year, a dangerous move from Samoa Joe broke Kidd’s neck during a live event as WWE doctors medically disqualified him to compete ever inside the squared circle. TJ and Natalya have been childhood buddies who later went on to become a couple. Their wedding has been featured in the Total Divas show, as well.