Bayley is the reigning SmackDown Women’s Champion who’s reaching new milestones, every now and then. She’s been the champion since October 2019 already surpassing the 1-year landmark which itself is a big achievement. Overall, her combined Women’s Title reign stands over 500 days which is not a joke, either.

Just a few days before Hell In A Cell 2020 where she will be facing Sasha Banks inside the Cell structure, Bayley has now racked up another record. The former Hugger, who has also been named PWI’s Top Woman Wrestler of 2020, is now gloating something that only she possesses in this generation.

LSines2015 of Reddit shared an interesting piece of information that garnered a lot of attention. Bayley is now standing at the top spot for most days as Women’s Champion in WWE’s modern era. It includes her time in NXT while standing only second behind The Fabulous Moolah.

Bayley has been champion in WWE for 949 combined days, and that count will only grow as she continues to be a champion. Moolah’s top spot can’t be topped as she held her titles for a combined 10,775 days which is just over 29.5 years. Charlotte Flair is in the third position standing behind Bayley with 947 days whereas Asuka comes in the next position at 938 days. Her count will also grow as she is the reigning Raw Women’s Champion.

The full list of the longest champions, in combined ways, is given below, 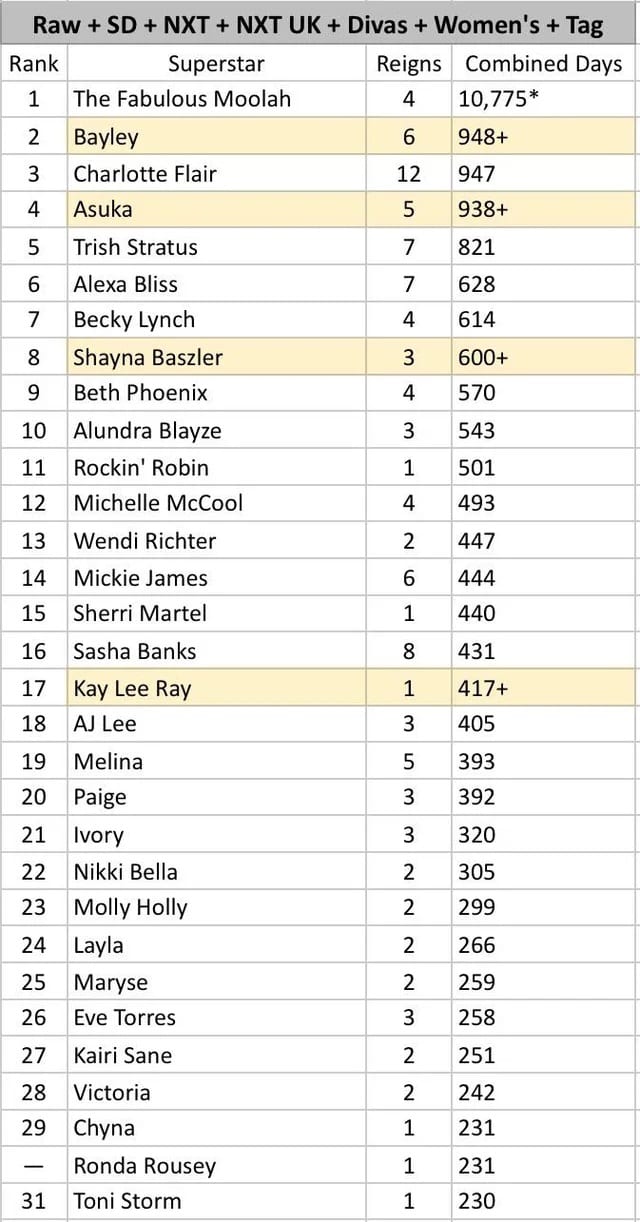 Meanwhile, here’s a look at Bayley’s achievements in her illustrious career in the WWE.

Match of the Year (2015) vs. Sasha Banks at NXT TakeOver: Brooklyn

Bayley has been defining herself as the Golden Role Model ever since winning the SmackDown Women’s Title, last year. The moniker was solidified even more as she captured the women’s tag team titles with Sasha Banks who also won the Raw Women’s Title in July. Now, these two former best friends have turned into foes who’ll now face each other at Hell In A Cell 2020 PPV.