Kayla Braxton has had contracted the virus last year who had to make her way to the WWE ThunderDome on this week’s Raw as her colleague Charly Caruso was absent. Rumors have that Charly could be in contact with the virus.

After RAW went off the air, Kayla Braxton jumped on Twitter mentioning that she was sickened by the “jokes” that some fans were tagging her in,

“While I was at work tonight, I got a call that someone very close to me died of covid. And as I logged on to this platform tonight, I noticed multiple disgusting tweets tagging me to make jokes about me when I had the virus early this year. FU*K you.”

Apparently, she was so disgusted with the behavior from the WWE fans that she opted to leave the social media platform, anyway. Kayla Braxton battled COVID-19 on two occasions who has hurt with those posts related to COVID-19. Those “jokes” were very insensitive and hurtful especially considering that she has lost someone close due to the virus. As a result, her Twitter profile transformed into the below-given state, 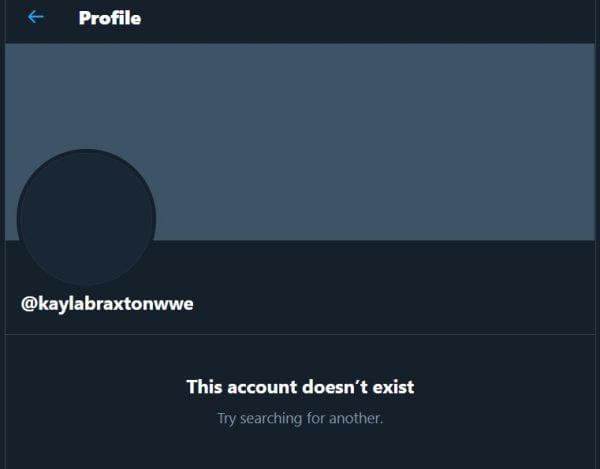 As you can see, WWE The Bump on YouTube host has deactivated her Twitter account. This is not the first time that Kayla Braxton has left her social media account in recent memory. She did the same back in July, but she returned after a few days. We hope that he can go through this tough time and eventually return to Twitter. This break can help her to receive some mental piece.

Kayla Braxton is one of those WWE Divas who often lit up her social media profiles with some temperature-raising pictures. Being an active member on such platforms, she was quite well aware of the hatred that getting spread around her. But things must have gone downward for her as she could be despised with the happenings.

“Was keeping it quiet but since everyone else is sharing, I feel like it is my responsibility to share this PSA: YOU CAN GET COVID-19 MORE THAN ONCE! I had it back in early March and then thought I was invincible after I recovered. Not true. Dont be dumb like me,” she mentioned in a tweet back in mid-2020.