Brock Lesnar is all set to make his anticipated return to WWE TV, sooner than expected as his ongoing suspension was lifted. It’s now been confirmed that the top-most WWE Superstar will make an appearance on the next episode of WWE Smackdown that takes place at the AT&T Center in San Antonio, Texas.

WWE announced during this week’s post-Survivor Series edition of SmackDown on FOX that Brock Lesnar will be making his return from the indefinite suspension that was recently handed down by WWE Official Adam Pearce. 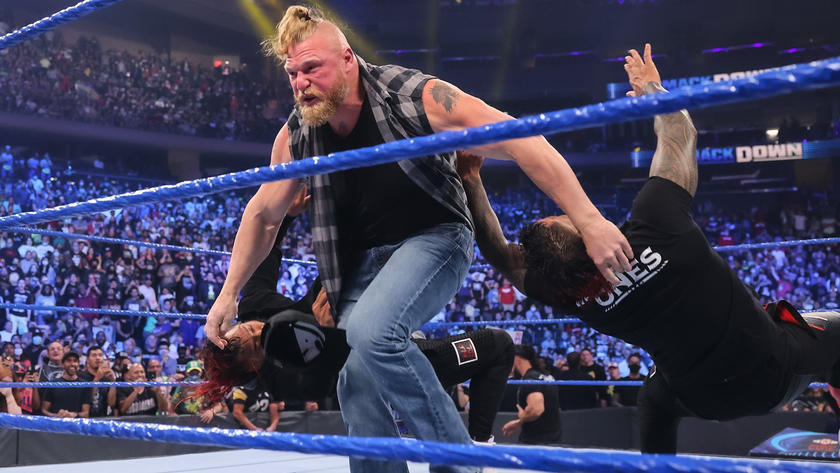 It was a storyline angle where The Beast Incarnate pounced on WWE’s crew members, officials including Adam Pearce during the October 22 edition of SmackDown. He was poised to get payback after getting scr**ed by The Usos during his loss to WWE Universal Champion Roman Reigns at Crown Jewel, a day before.

Brock Lesnar’s suspension was announced a few weeks ago

This happening forced Adam Pearce to announce a $1 million fine to Brock Lesnar, and an indefinite suspension for him from WWE TV. WWE progresses that suspension storyline at the Survivor Series pay-per-view this past Sunday, where Kayla Braxton approached Paul Heyman and talked about how the suspension was no longer indefinite.

Then on Smackdown, the suspension rumors continued throughout the show until Kayla was informed by the end of the show that it was officially lifted. Kayla also confirmed that he will be back on SmackDown next Friday night that is during the December 3rd episode.

The indefinite suspension has been lifted and @BrockLesnar will be on #SmackDown next week?!?! pic.twitter.com/DFhe633SV3

Interestingly, it was previously announced on social media that Brock Lesnar was originally set to return during the December 10 edition of SmackDown from the Crypto.com Arena (fka Staples Center) in Los Angeles, California. Due to his suspension storyline, the former challenger for the Universal Title also had “vowed to buy a ringside seat” for that upcoming night from Hollywood. WWE never used that angle while the arena posted tweets about the same appearance which is still intact.

Last night, Sami Zayn won a Black Friday Invitational Battle Royal to become the new number-one contender to Roman Reigns. But his winning celebration was short-lived as Kayla announced the returning news of Brock Lesnar during that segment. This led to fan speculations on how The Beast may end up squashing Zayn and ruin his title match opportunity.