WWE has set the platform high for the debut match of Rey Mysterio’s son Dominik. He went through some brutal experience on this week’s Raw episode, too that presented him with the reality in the big league. It seems his dad will get involved in the scene at some capacity and the Second City Savior has a bit of advice for him.

CM Punk came up with some interesting suggestions for fellow WWE legend Rey Mysterio ahead of Dominik’s debut match against Seth Rollins at SummerSlam.

As seen on last night’s edition of Monday Night Raw, Rollins and Murphy tied Dominik’s arms to the ropes and repeatedly hit him kendo sticks for over 30 times in a row. While carrying out the attack, Seth also looked at the camera and sent a message to Rey Mysterio, asking him to beg for forgiveness on behalf of his son.

“Beg, beg for mercy for your son, you coward,” Rollins yelled at the Master of 619.

Soon after the vicious attack was over, Rey Mysterio took to Instagram and wrote, “You took this to another level @wwerollins. You will FKN pay for this!!”

CM Punk responded to the post and asked his once rival to shave Rollins’ head, “Bro, shave his head. Never been done,” he wrote.

Punk was clearly referring to his Straight Edge Society Pledge vs. Hair Match against Rey Mysterio at Over The Limit 2010. The latter went on to win that match and then proceed to shave Punk’s head. Since then, Punk has never grown his hair back.

Since Rey Mysterio has been involved in the conversation, we assume that he could get involved in the SummerSlam fight between Dominik and Seth Rollins. It also hints that he might have thought of re-signing a contract with the WWE if not it’s already been done. 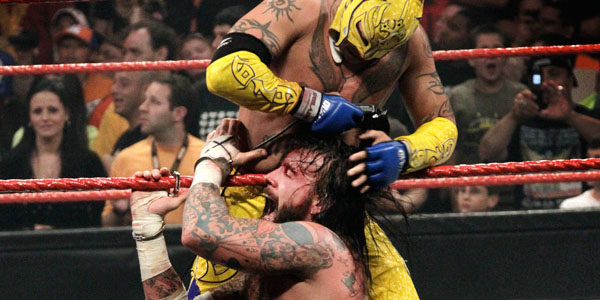 During the contract signing segment that opened Raw, Rollins announced that Dominik would be allowed to use any weapons during their SummerSlam match. The Wrestling Observer has recently reported that Rey Mysterio is staying with WWE and his son will be a part of the new deal as well.

“I can’t confirm pen to paper, but Rey Mysterio is staying, as was always the betting line outcome of this, but it’s as close to official without confirmation of it being official, and obviously Dominik is a big part of that deal.

AEW made an offer that equaled the WWE’s per-match offer, but the WWE offer was higher because it was for more dates. We don’t have a time frame past this new deal would be considerably longer than the previous (18 months) deal but not the five-years or longer deals that WWE has tried to get everyone on.”

While WWE is yet to announce a stipulation for Dominik vs Seth Rollins match, it was noted during the contract signing segment that he’s allowed to use any kind of weapon during the match. Who knows if that weapon turns out to be none other than Rey Mysterio who would make his return after losing an eye at the Horror Show at Extreme Rules.