WWE Raw: Attitude Era-like Faction Could Be Back On The Show

As seen on this week’s episode WWE RAW, Shelton Benjamin won the 24/7 Championship by attacking R-Truth from behind. He then joined MVP and Bobby Lashley in their faction named “The Hurt Business”. Later, MVP and Lashley were also seen with WWE Hall Of Famer Ron Simmons aka Faarooq backstage.

Apparently, WWE had plans to build a revamped version of an Attitude Era faction which may not be on the card, anymore.

The recreation of Nation of Domination on WWE Raw was the reported plan on WWE Raw but that direction may have been nixed. The Wrestling Observer is reporting that WWE has been planning to bring back the group from the 90s using all these guys, who’ll probably be managed by Ron Simmons. WWE may have held the angle for this week but the plan could be back in the near future, 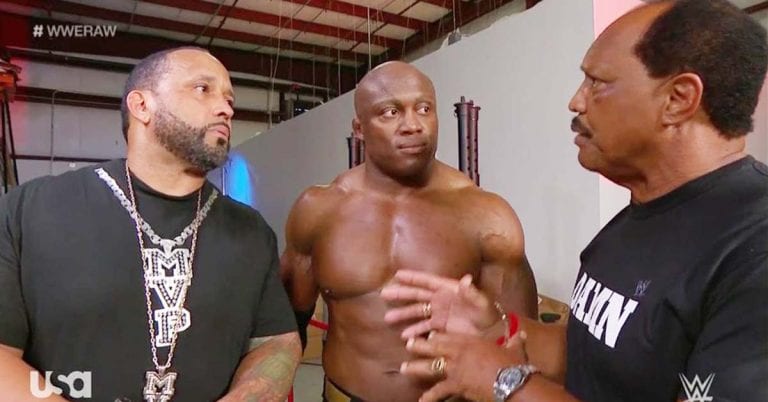 “So there is an idea — I don’t know if it was dropped. Originally it was going to be on the show for a revamping of the Nation Of Domination and Ron Simmons was supposed to be part of that angle, but they dropped that angle for this show.

They may be building to it later, they may have dropped it completely. They brought him in for that angle so that’s why he was on television.”

Ron Simmons was supposed to be a part of that angle and he was present at the Performance Center for the same reason. But the taping of his angle wasn’t done as they might have been held back for sometimes.
As seen on WWE Raw, this week’s episode saw The Hurt Business lose a six-man tag team match to Mustafa Ali, Ricochet, and Cedric Alexander. But this rivalry may haven’t been over, yet. It will be interesting to see whether Ron Simmons officially joins The Hurt Business which is the new name for the stable with MVP, Bobby Lashley, and WWE 24/7 Champion Shelton Benjamin.

While the bigger angle was dropped for this week’s show, WWE still wants to build the Nation of Domination in a big way. Shelton Benjamin picked his first win in 14 years while winning the 24/7 Championship. As for MVP, he is set to challenge WWE United States Champion Apollo Crews when he returns.