Booking genius Pat Patterson is no more with the professional wrestling industry. After leaving a mark that is almost unmatchable, the legendary name has passed away, last night. He was 79-years-old. His cause of death has been revealed through a report from Newsweek.

The source is among other outlets that reported that Pat Patterson was hospitalized in Miami, Florida where he was battling cancer. The fight came to an end after the doctors declared him dead. He used to be Vince McMahon’s right-hand man for many years and The Boss won’t have that trusted shoulder, anymore with him.

Pat Patterson, passing away will indeed leave a huge void in the pro wrestling world, especially in WWE as he was a key member of the company’s backstage operations for years after hanging up his boots from in-ring competition. WWE’s Twitter handle paid tribute to the legend with the following remarks,

“A true trailblazer of the industry, Patterson was linked to many “firsts” in sports-entertainment throughout his storied career, including the first-ever Intercontinental Title reign and the creation of the Royal Rumble Match. In a career spanning six decades, the renaissance man left an indelible mark on the industry in the ring, on the microphone, and behind the scenes.”

Pat Patterson is best known as the first-ever WWE Intercontinental Champion, a title that he worked to raise the prestige for. He was a trailblazer in many other genres of the professional wrestling industry who is also known as one of Vince McMahon’s “Stooges” along with Gerald Brisco.

The WWE Chairman and CEO noted on Twitter how Pat Patterson laid the foundation of the company with his hard work and dedication,

“Pat Patterson was more than the first Intercontinental Champion & father of the Royal Rumble Match. He helped lay the foundation for WWE as we know it. His mentorship shaped careers, his creativity sparked innovation and his friendship lifted spirits. Love you, Pat. We miss you,”

Apart from Vince, The Rock, Stephanie McMahon, John Cena, Hulk Hogan, Triple H, and many more wrestling personas have expressed their condolences over the death. 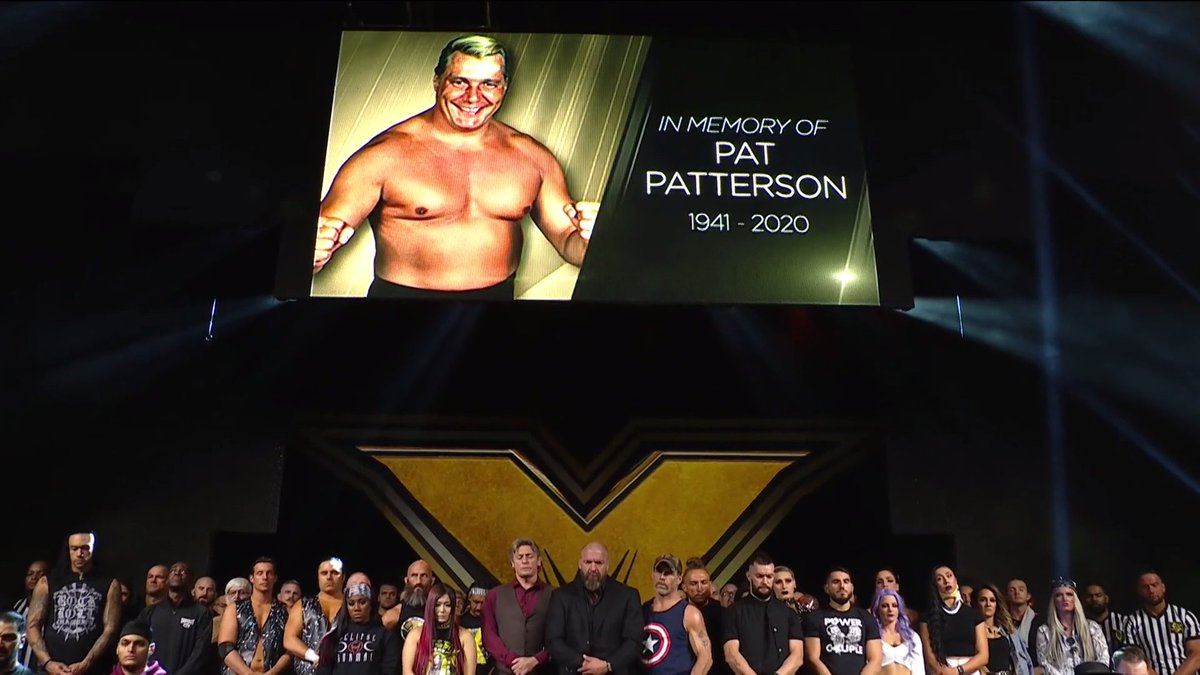 Last night’s “Takeover: WarGames 2020” go-home edition of WWE NXT on the USA Network kicked off with a tribute to Pat Patterson who lost in his battle with cancer. The show opened with Triple H and the entire NXT roster, including WWE Hall of Famer Shawn Michaels and William Regal, standing on the ramp for a tribute to the inaugural WWE Intercontinental Champion.

Pat Patterson was more than the first Intercontinental Champion & father of the Royal Rumble Match. He helped lay the foundation for WWE as we know it. His mentorship shaped careers, his creativity sparked innovation and his friendship lifted spirits. Love you, Pat. We miss you. pic.twitter.com/TugpAOrN6O

Tough morning hearing the news about Pat,shocked,RIP my brother,Pat and Buddy Colt let me ride with them when I had my first match,the ribbing started that day and went on until now,love you my brother,tabernac HH

I don't have the words to properly convey the respect and admiration I have for Pat Patterson.

Whatever I can offer, it's simply not enough. #RIPPatPatterson — your contributions to our lives will forever be appreciated! pic.twitter.com/vm4C6cRXLl

Pat Patterson knew @WWE was his home away from home, a place where he felt completely accepted and truly loved. Someone like Pat made all the difference because he wasn’t afraid to be himself and he made no apologies for it. Pat did it his way. Rest in power, Pat♥️ pic.twitter.com/3hRYmaCb5W