WWE will love to break yet another record by holding WrestleMania 37 in April. For years now, the biggest event in sports entertainment has been synonymous to shatter some records until WWE was hit with the coronavirus pandemic, last year. Now the plan is to bounce back and beat a mainstream sport in terms of attendance.

The host Raymond James Stadium is originally home to this year’s Super Bowl which is the biggest sporting event around the United States. WWE is yet to announce any details about the tickets of WrestleMania 37 as they might be waiting on how NFL attendance does. The Chief Brand Officer has already stated how they will be observing the NFL games, closely. 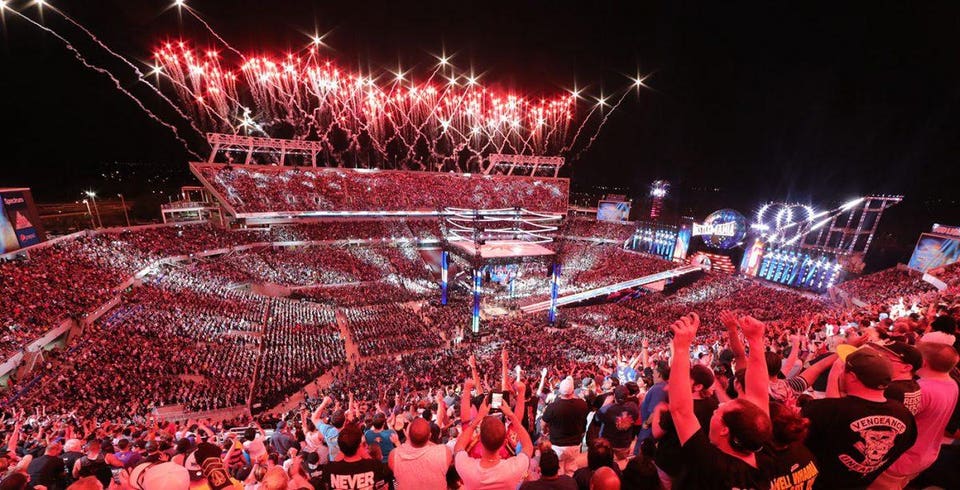 The Wrestling Observer Newsletter now reports that WWE is looking to bring more fans into WrestleMania 37 on April 10 and 11th than the Super Bowl that takes place on February 7th. It was noted by the source that the current belief is that WWE will monitor the Super Bowl’s attendance to “do something similar or slightly higher.”

In contrary to the earlier reports of presenting 25,000 people in the stadium, the current plan looks to be to put 30,000 people in the building on both nights. If the Super Bowl could gather more people, Vince McMahon and Co are likely to pull in even bigger numbers.

It was also reported that the size of the WrestleMania 37 stage and all the other areas that can’t be sold, WWE can “legitimately put in about 5,000 fewer people than a Super Bowl.” Also, the company is likely to inflate that number as they do every year.

“The company will often exaggeration attendance numbers from 7,000 to 20,000. That strategy might be used this year, but they also need to be careful as to not announce a number that would be too large for the current circumstances.”

It should be noted how WWE often likes to run big events like WrestleMania 37 right after the Super Bowl so that when they announce attendance number with inflation and it should be higher than the Super Bowl, by any means. With live fans returning to the scene, there will be a lot of excitement attached, without a doubt.

That actual information regarding the numbers is coming, but they might just have to wait a bit longer to see what the NFL is doing with their biggest game of the year. WWE will run a two-night WrestleMania 37 continuing a trend for two straight years. So a lot of expectations are obviously attached to the shows as fans expect bigger names to be a part of the phenomenon.