WWE is currently trying to get together the WrestleMania week events and it can be assumed that an NXT TakeOver will be a part of it. Reports indicate that the pay-per-view from WWE’s third brand will go down on April 8th, Thursday, which is two days prior to the Show of Shows. However, no such official information is available regarding it.

According to the reports of PW Insider, the next WWE NXT TakeOver is going even bigger. Perhaps it could be hosted for two nights that is on April 7th and April 8th, just like Mania itself. There have been talks of the show being the first-ever “two-night” Takeover, with part one airing on the USA Network and then Part Two on the next night on the WWE Network.

This could be an interesting situation with WWE’s regular NXT show being a part of NXT TakeOver PPV. But with a month remaining, the idea could be changed. Nothing is finalized until and unless the company makes an official statement about it. Given WWE’s recent trends of hosting separate PPVs for the NXT brand, it’s almost certain that another is coming during the biggest weekend of the year.

WWE might score some big rating with NXT TakeOver on a regular Wednesday night if this planning appears to be a reality. This could also mark an end to the Wednesday Night War with AEW Dynamite given that NXT is reportedly moving to Tuesday nights, the following week after WrestleMania. There’s no official update on this context, either.

The dedicated fanbase of WWE’s black and yellow brand could be excited of the news of a brand new WWE NXT TakeOver during WrestleMania weekend, within just six weeks. People who are canceling their WWE Network subscriptions have seen the update. While making their move to Peacock, they have discovered that an interesting piece of information was thrown upon them. 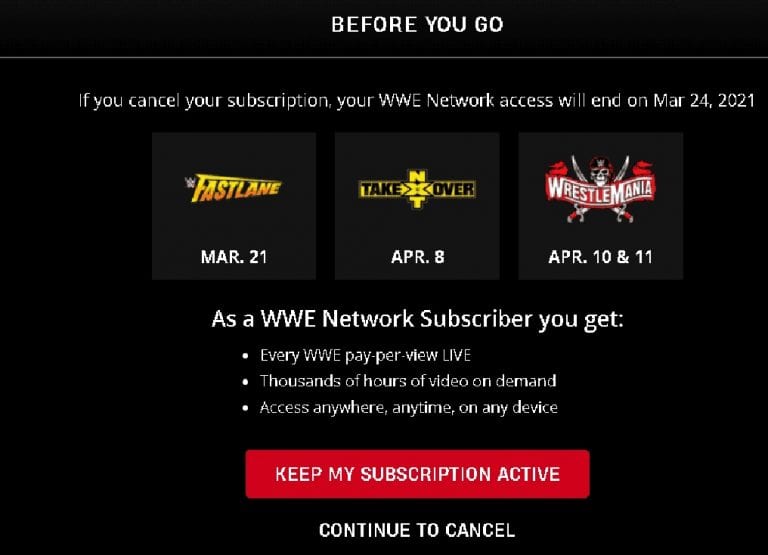 A message popped up before the cancellation informing that fans who cancel their WWE Network subscriptions will miss upcoming events such as FastLane on March 21st, WWE NXT TakeOver on April 8th, and WrestleMania on April 10th and 11th. Now, it makes sense why there won’t be any NXT Title match on the main card of WrestleMania 37.