The post-Elimination Chamber PPV episode of WWE Raw was presented, this week where a lot of questions had to be answered around the title picture. A new WWE Champion started his reign only to receive a mammoth name as his new challenger. The tag team champions as well as the US Champ were in action on the show that aired from the Tropicana Field in Tampa Bay, Florida. Check out the results, 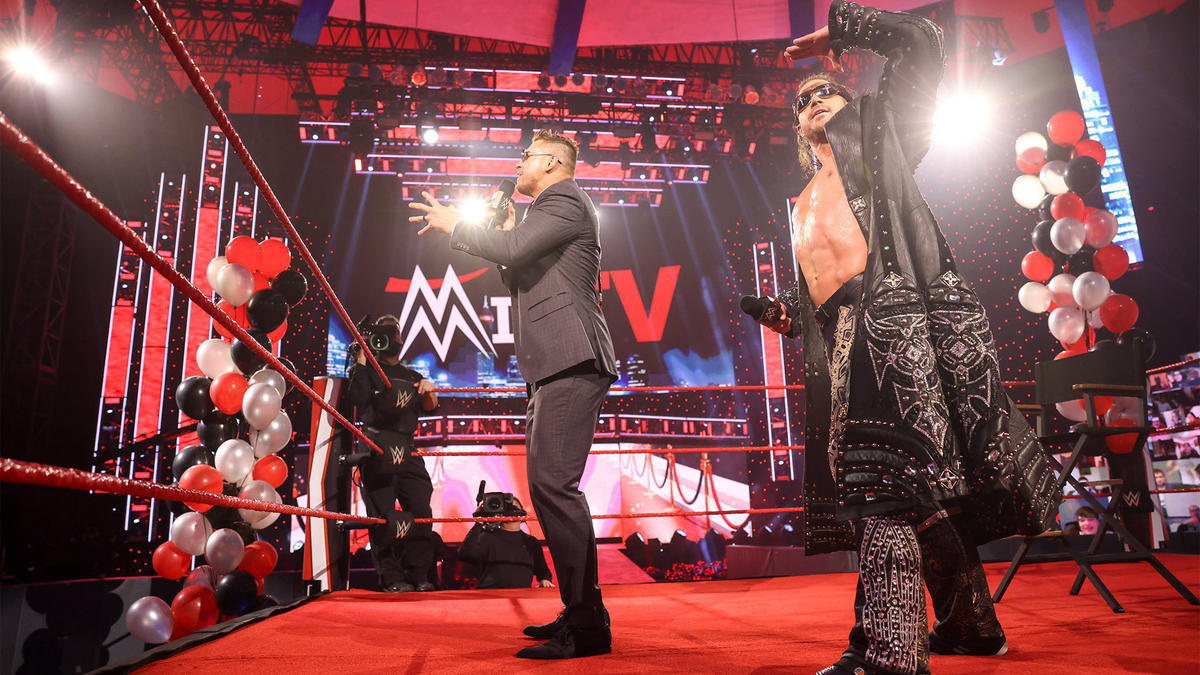 The Miz opened WWE Raw with a championship celebration on Miz TV alongside John Morrison. As he was ranting about his career accolades, Bobby Lashley and MVP soon arrived at the ring. Lashley was quick to make his demand of a title match from Miz as he helped him to win the title. Lashley gave an hour to the champion to let his decision know. 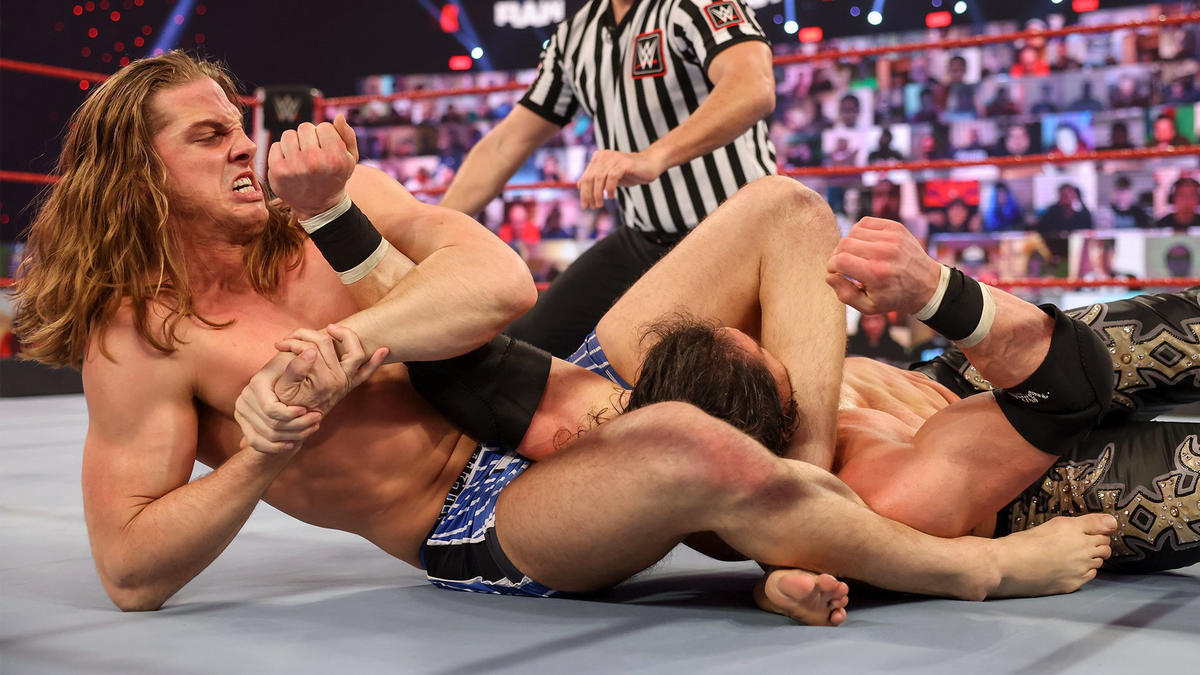 United States Champion Riddle vs John Morrison was the opening match of WWE RAW where Riddle connected with the Bro 2 Sleep only to be hit back with a kick. Morrison missed a Starship Pain as Riddle hit the Bro Derek for the pinfall win.

The New Day’s Xavier Woods and Kofi Kingston competed against RETRIBUTION’S Mace and T-Bar in a tag team match. Kofi nailed two back-to-back Trouble in Paradise Kicks on his two opponents. He pinned T-Bar for the win. RETRIBUTION leader Ali seemed furious over this and he left his teammates in the ring. 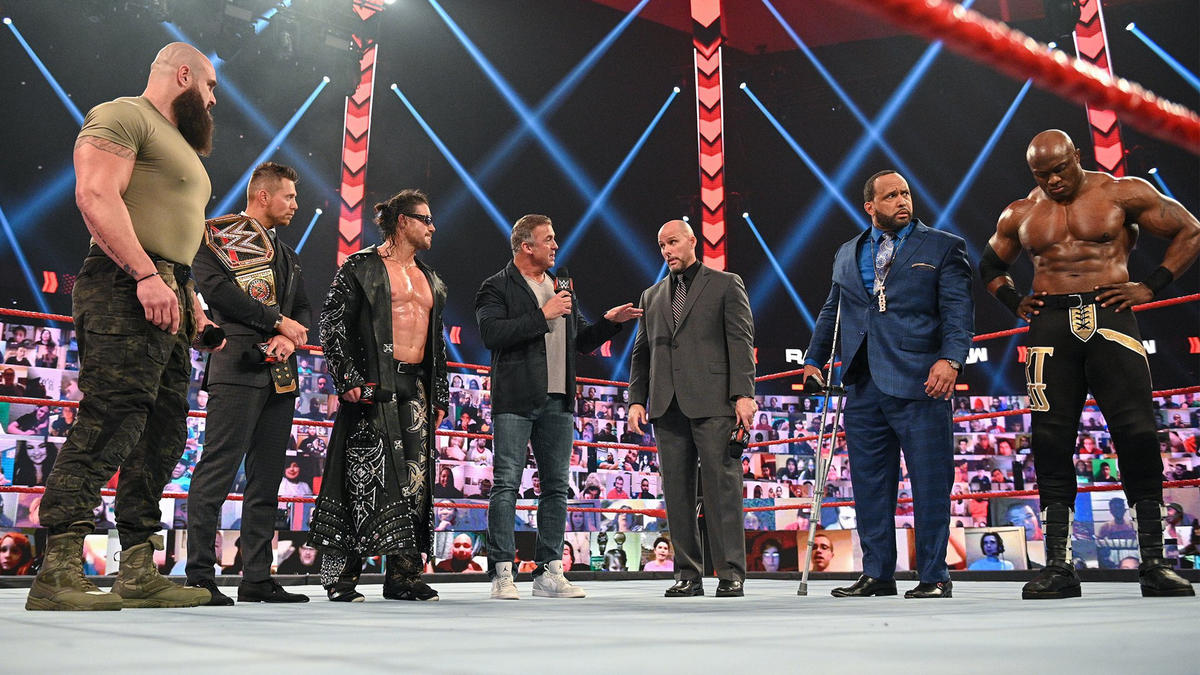 Bobby Lashley was standing in the ring demanding his title shot while The Miz was saying he needed some more time. Even Braun Strowman entered the melee demanding a shot. Shane McMahon finally showed up announced the main event of WWE RAW between Lashley and Strowman. The stipulation is if Braun wins, then next week there will be a Triple Threat for the WWE Title with Strowman, Lashley, and Miz. 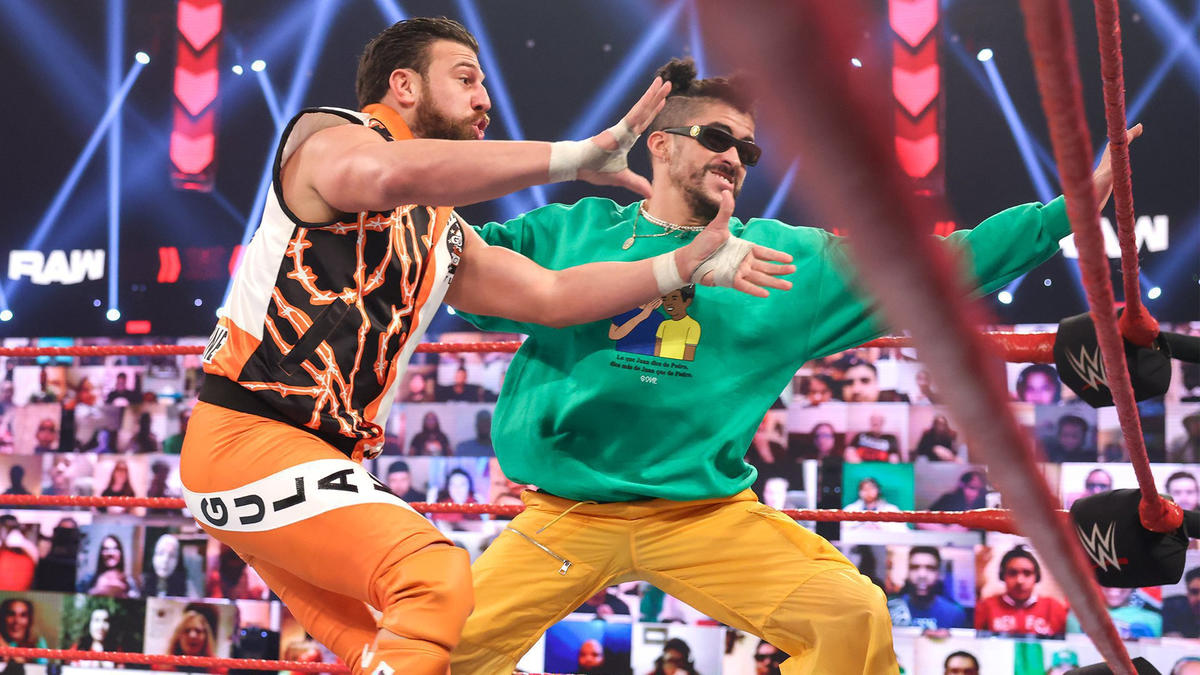 Bad Bunny was present at ringside as his partner Damian Priest defeated Angel Garza in a singles contest. Priest executed Hit the Lights move on Garza as he was focusing on Bunny. After the match, Akira Tozawa, Humberto Carrillo, and Drew Gulak were after Bunny’s 24/7 Title but Priest cleared the ring to help his buddy.

Randy Orton addressed the recent actions from Alexa Bliss which is keeping him away from the WWE Title picture on WWE Raw. Orton was trying to indicate how he’s going after Bliss but his voice choked out. We saw a black liquid coming out of his mouth. The segment ended with more such liquids flowing out of his mouth. 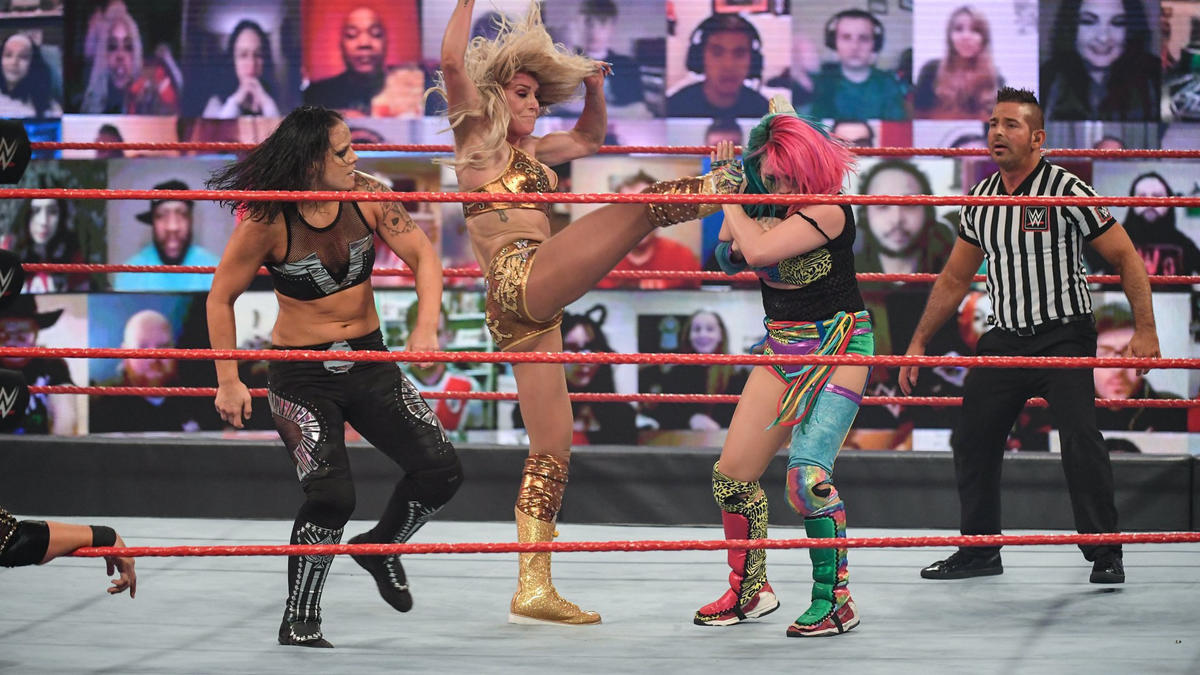 WWE Women’s Tag Team Champions Nia Jax and Shayna Baszler vs. Charlotte Flair and WWE RAW Women’s Champion Asuka was the next match lineup. A miscommunication during the match witnessed Flair delivering a big boot on Asuka. This led to Jax connecting with a Leg Drop on Asuka for the pinfall win. Asuka and Flair showed tensions as this match was over. Flair then had a conversation when she advised Ric Flair to go home as his presence was distracting her.

Sheamus defeated Jeff Hardy in a singles contest as the latter missed a Swanton Bomb attempt. Sheamus hit Hardy with a knee-strike before connecting with a Brogue Kick for the pinfall win.

Naomi and Lana won in a tag team match against Dana Brooke and Mandy Rose. Lana knocked Dana off the apron before tagging in Naomi. The duo double-teamed on Rose for the pinfall win. 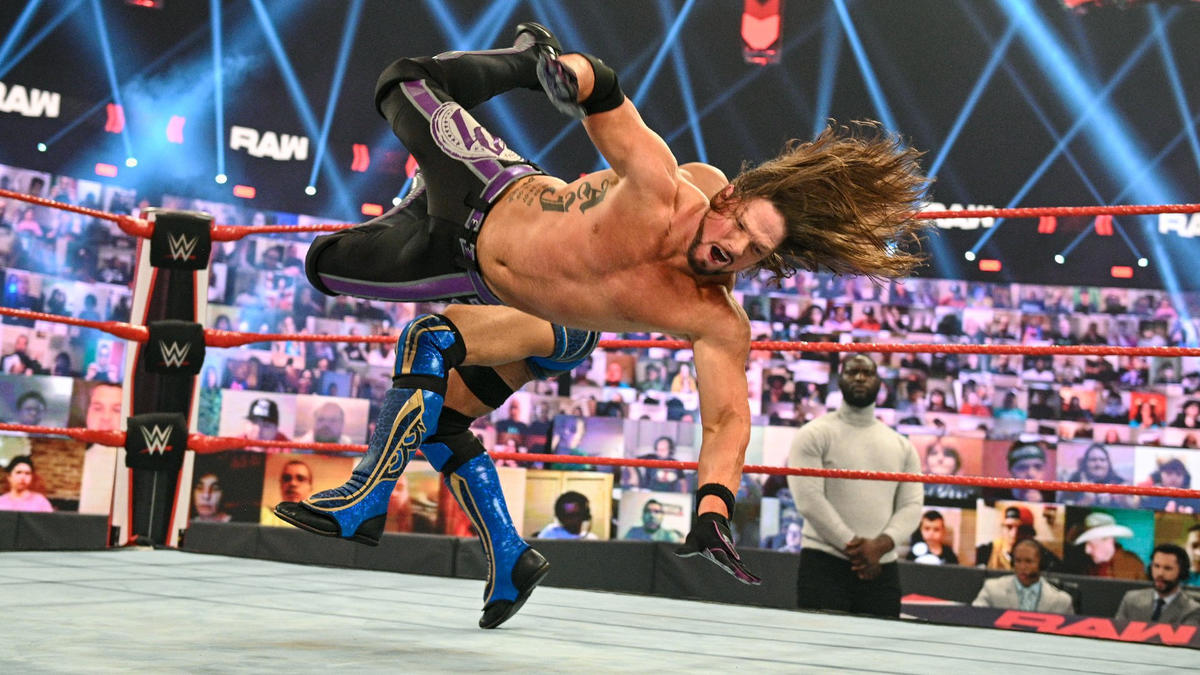 AJ Styles competed in a match against Ricochet where the latter connected with a German Suplex but missed a 630-splash. AJ delivered a knee to the face before hitting the Styles Clash for the win. After the match, Omos threw Ricochet to the mat. 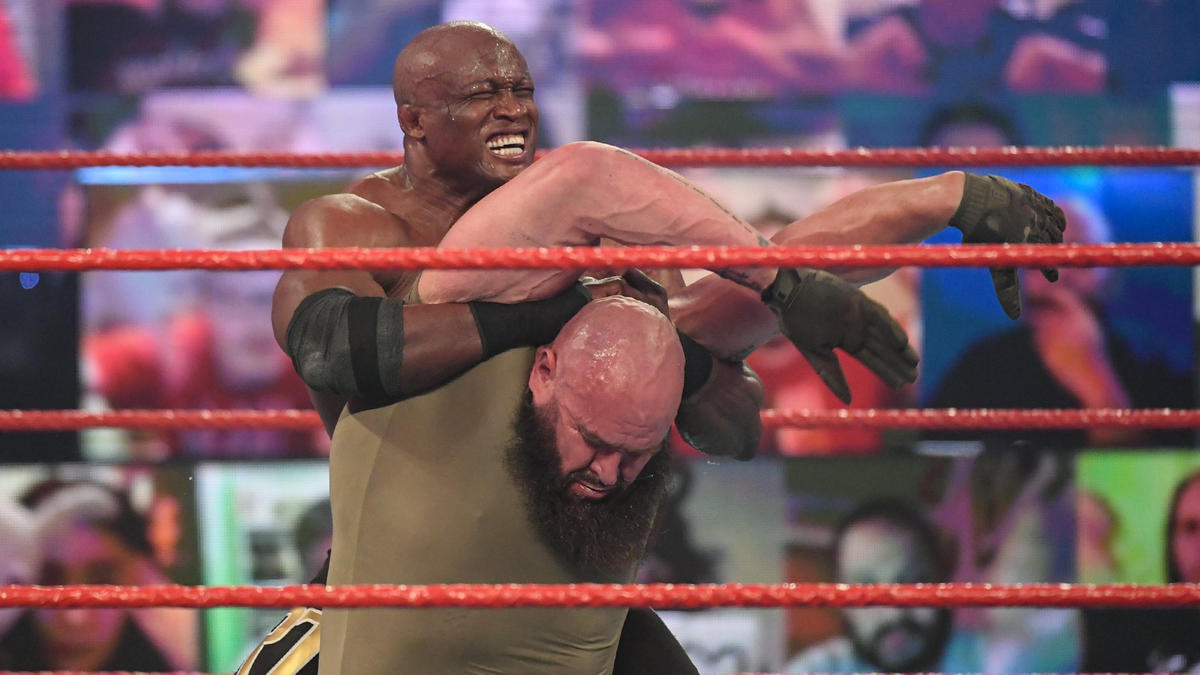 WWE Raw main event witnessed a Number-one Contender’s Match between Braun Strowman vs. Bobby Lashley. Strowman was unable to get the pinfall win after connecting with the Running Powerslam. Lashley was up, on his feet to connect with a big spear to win the match. It was confirmed that Lashley will face Miz in a title match, next week. Afterward, Lashley destroyed Strowman and The Miz using Hurt Lock and Spears to stand tall and send the show off-air.