It’s been recently reported that AEW Battle of the Belts will be returning soon despite the previous not getting much attention. The company seems to have made this a quarterly edition and the final one will go down one day before WWE’s next premium live event Extreme Rules 2022, set for next Saturday.

AEW Battle of the Belts IV will be taped following the live episode of AEW Rampage on Friday night in Washington, DC on October 7th. Then the taped show will air on the same day. Reports suggested that AEW wanted to remove airing conflicts with the WWE Network Specials by adjusting the streaming slot. 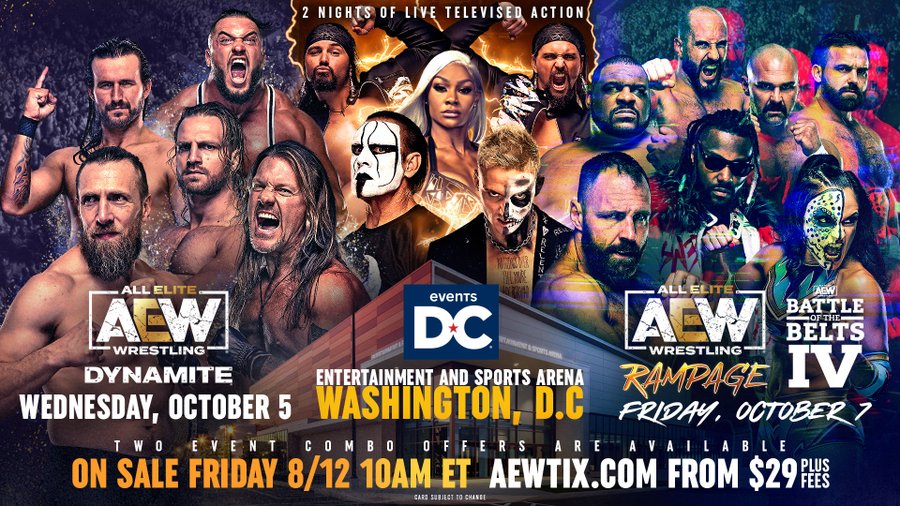 Previous listings suggested that AEW will air a live Rampage on Friday, October 7th, in addition to taping AEW Battle of the Belts IV. Originally, Rampage was listed as airing at 9 p.m. ET followed by the special IV at 10 p.m. ET.

But TNT has since updated the streaming schedule as Rampage will be airing at 10 p.m. ET followed by AEW Battle of the Belts IV airing at 11 p.m. ET on Friday, October 7. The start time for the show is listed locally as 8 p.m. ET.

The first match for the 4th AEW Battle of the Belts 2022 edition has also been announced. Following his controversial victory over Orange Cassidy at AEW Dynamite: Grand Slam, Pac will defend his All-Atlantic Championship against Trent Beretta at this weekend’s show. With that, the feud between the two that began at AEW Revolution 2020 will continue.

Cassidy is yet to defeat Pac in a singles competition as the feud progressed. In their final match at AEW Dynamite: Grand Slam, Pac needed to use the ring bell hammer on Cassidy to defeat him and remain 5-0 in a successful championship defense. In the Twitter video hyping the AEW Battle of the Belts IV match, the challenger stated that he wants to seek redemption for the attack with the bell.

This title bout will also continue the feud between two factions Death Triangle and Best Friends that began all the way back in Spring 2020. Pac is also a dual champion in AEW as he teamed up with The Lucha Bros to defeat Best Friends to win the vacant AEW World Trios Titles vacated by The Elite.