WWE Divas were used to be in skin show purposes rather than being female athletes. As a result, WWE Divas got exposed on uncountable occasions on live TV for just satisfying the raw instincts of male professional wrestling fans. The industry was dominated by males only and these kinds of adultery revelation segments proved how the women were treated.

Comparing to the current Women’s Evolution Era, those segments might seem unwatchable to some of the modern era fans but there’s no denying that ratings were always up whenever WWE Divas got exposed. Such exposing segments had different appeals for which fans were often forced to turn on their TV. While sometimes WWE openly sent invitational to fans for those, sometimes it happened accidentally.

Here are ten occasions when WWE Divas got exposed be it intentionally or accidentally, 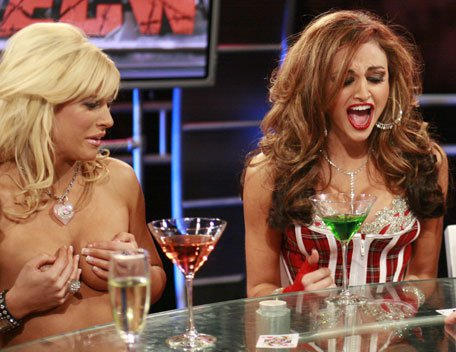 ECW always promoted show-off things for their female talents. Going by the extreme theme of their brand, they always used their females to entertain the fans by showing skin. As a result, we got Kelly’s Expose or Extreme Strip Poker segments.

During the 10th October 2006 episode of ECW, one such segment went down where names like Kelly Kelly, Ashley, Maria Kanellis, Candice Michelle, Layla, and more took part. WWE Divas got exposed, fully on that night as the scripts demanded it to be that way. While Kelly volunteered to take off her clothes, Maria and Candice pulled out each other’s bra and started a brawl in no clothes!